On March 19th, `the Countess of Wessex took part in the 65th Commission on the Status of Women virtual event. The event was put together by the Afghanistan Mission, the Permanent Mission of Afghanistan to the United Nations in New York.

The 65th Commission on the Status of Women is considered to be critical moment for the peace process in Afghanistan. The Countess spoke with foreign leaders on how international support can be provided for Afghanistan Women’s Rights and tackling the violence they experience.

The Countess highlighted how the virtual event had brought forward many important questions, to which Sophie replied she didn’t have ‘the magic wand’ to answer them. She noted how the ‘women in Afghanistan have made such huge strides forward and they have always been effective but for so many years they were kept in the shadows and have actually started to make an impact on the country.’ 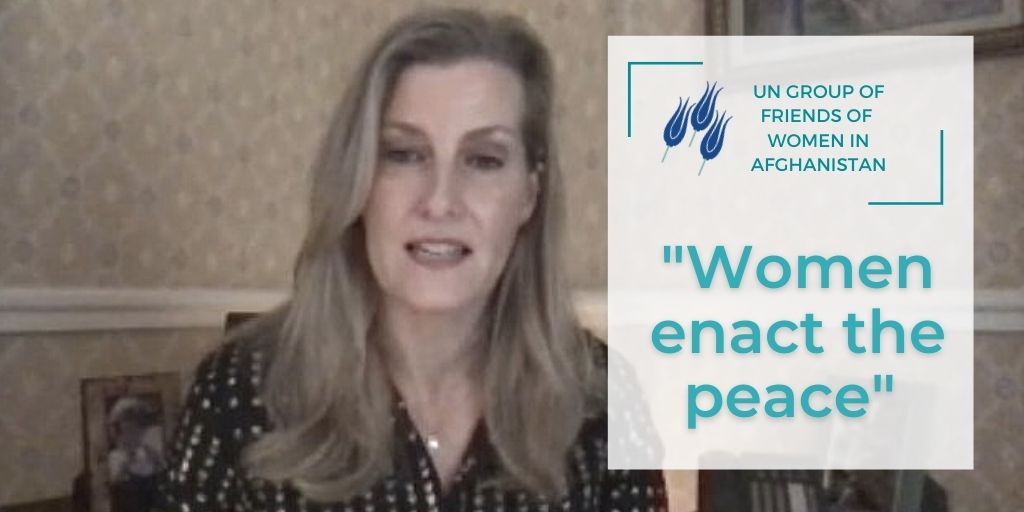 She said how it was in ‘our vested interest to help support them and keep them in these positions and to keep improving their situations.’

After recently admitted that the serious nature of the work has seen her go to ‘very dark places’ mentally, Sophie was asked why she is committed to this issue.

“The question of why am I so committed to help champion this kind of work is why wouldn’t you be when half the population are women and they are so effective in getting things done.

“So you ask yourself why would you not have them at the table to shape what the peace looks like. They are at the frontline the entire time, whether it be creating and moving communities forward or whether these amazing women actually put themselves in the room and be part of the peace process.

“‘We are at a critical moment right now and I really hope and pray that they are going to continue to have an effect and are actually going to be continued to be part of this process.”

HRH The Countess of Wessex, a champion for #WomenPeaceSecurity for the UK, calls on international leaders to “listen to women of #Afghanistan.” Ensuring that women’s voices are heard throughout the #AfghanPeaceProcess and beyond is essential to lasting peace. @RoyalFamily pic.twitter.com/qkMNN5ctlu

Sophie was asked to reflect on why society are having this discussion: “We also have an important question to ask and it sort of the permanent question that is the elephant in the room: Why are men so afraid of having women in the room?

“‘Because again the women are the ones who will actually enact that peace, so I hope by the example that women have shown in Afghanistan in recent times, that they are really good at what they’re doing, they’re so effective and by that influence they will retain a foothold.

“It really falls onto the international community to do as much as we possibly can to assist them and to protect them. And recently the UK funded the women peace protection framework and I really echo Elisabeth Millard’s voice when I say I really hope that other countries will take up that baton because as we have seen as Mrs Gana said to us we have seen some terrible violence taking place and we have to ensure the protection of women who put themselves at the front line that they are well protected.”

During the event, the mother-of-two was asked by the leader of the conference: “How do we protect women from the violence?”

“I don’t have sadly all the answers but what I do have is the ability to say let’s keep going,” came Sophie’s reply. “We have a duty to help them. We have to listen as well, I think it’s so important to listen to the women of Afghanistan to say what is it you need; what does the international community need to do more of in order to help support those processes and to make things effective and move forward.

“For me, this encounter and every involvement, particularly with organisations like yours Melanne, I learn more and more and I think we all do. Every day is a learning day for all of us and that is why we have to be so open-minded and agile in the way that we are.”

The Countess concluded: “Thank you for allowing me to be part of this discussion today and I look forward to hearing more from the speakers that are coming but I would just like to say and encourage all the people who are on call today, to keep doing what we can to support this process because it is so important.”

Whilst The Countess of Wessex is an advocate for combating violence against women, she isn’t the only member of the Royal Family to take a similar stance. The Duchess of Cornwall gave her praise to the ‘Ask for ANI’ scheme, describing the idea to help domestic abuse victims as ‘pure brilliance’.