In a new docu-drama to be aired on the BBC next week, it is claimed that Elizabeth Bowes-Lyon, future Queen Mother, wanted Edward VIII for herself – and only settled for Albert, future George VI, because Wallis Simpson got in the way.

‘Royal wives at War’ documents the relationship between Elizabeth and Wallis, who were known to be at odds with one another. The documentary-drama is said to be based on letters and memoirs, but critics are calling this a ‘new low’ for the BBC. 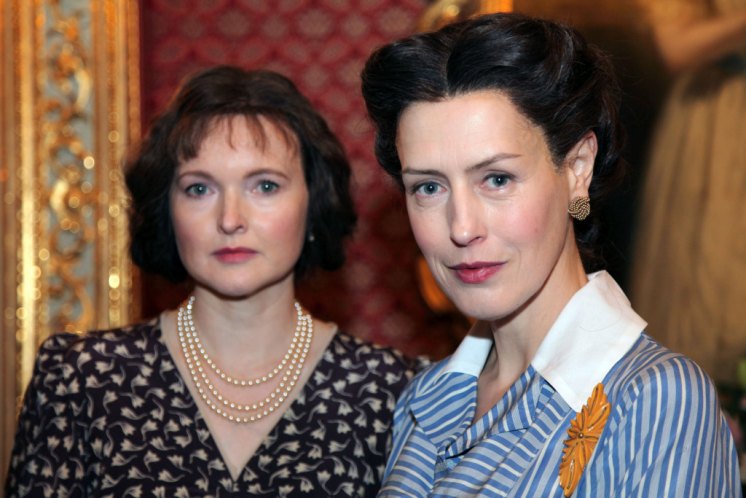 Edward VIII abdicated in 1936 so that he could marry the twice-divorced American socialite, Wallis. He chose love over duty, handing the throne to his younger brother, Prince Albert. In this take on the story, which sees Gina McKee portray Mrs Simpson and Emma Davies The Duchess of York, historians and biographers assert Elizabeth was waiting to marry David, but had to settle for Bertie instead.

Many historians have rubbished the claims, but Lady Colin Campbell, who did a stint in the ‘I’m a Celeb’ jungle late last year, Hugo Vickers, and Anne Sebba back the story up, featuring the in documentary themselves.

“She [Elizabeth] tried to marry David” Campbell said. “David wasn’t interested in her. He liked them slender, sleek and svelte, like Wallis.”

Elizabeth and Prince Albert married in 1923, in a ceremony at Westminster Abbey, despite turning down two proposals. She reportedly had had doubts about life in the Royal Family, saying she was “afraid never, never again to be free to think, speak and act as I feel I really ought to”.

Elizabeth would have spent much time with both Albert and David. Royal Wives at War BBC/Monika Kupper

Two dramatic scenes back these claims up, showing The Duchess of Windsor digging at The Duchess of York: “Cookie [Elizabeth] was sweet on David. Naturally he wasn’t interested. What could a silly little girl like her offer him, a man of the world?

“She only married Bertie when she realised it wasn’t going to wash with David…,” McKee’s Simpson says. “She was always gong to hate me. I had the prize and she had second best.”

In a separate scene, Elizabeth, now The Queen Mother, looks back on her life: “I turned Bertie down two times. I was very fond of his older brother. That’s no secret. David was tremendous fun.”

Lady Colin goes on to argue that The Duchess of York pursued a vendetta against The Duke and Duchess of Windsor: “There was a malicious element to Elizabeth’s treatment of Wallis. I think it was vindictive, vicious and she set out to destroy them as a couple.”

Leading historian Andrew Roberts said: “The relationship between these two women is dramatic and extraordinary, without the BBC inventing rubbish of this kind.

“No reputable historian believes the Queen Mother was ever in love with the future Edward VIII, let alone tried to marry him.”

Tory peer Lord Tebbit said: “It sounds to me like somebody is making up fairy tales… It’s not just that it’s hurtful, it’s just that it deposits a story of historical events which was just not so.”

Yesterday, two of the historians involved in the programme have attempted to distance themselves from the more controversial claims. John Julius Norwich gave his views on the idea that Elizabeth wished to marry Edward: “It’s a perfectly crazy idea. There was nothing between them like that.”

Hugo Vickers, biographer of The Queen Mother’s, said his role did not mean he condoned or supported the views of the other participants.

Duchess Camilla meets the Rifles after taking over...

Nothing like another supposed expose of the Royal family. Yes the BBC is stooping to a new low. Also, what the hell does Lady (so called) Colin Campbell know about English Royal history, other than that she so chooses to exploit in favour of her own recognition as a also ran. Georgie Ziadi (spelling) has the ability (and one has to admire this) to promote herself on many different levels. I remember a friend pointing out a segment on a reality show about uneducated women becoming ladies. This, insofar as her describing one of the contestants as ‘good stock for her son (Georgie Ziadi) to marry’. This, thinking good stock meant height and weight – like a cow at market. How could anyone think her comments re Royal history could have anything of any import. Please – enough.. E &OE

Elizabeth Bowes Lyon was desperate to marry the Prince of Wales, she turned down the two proposals of the Duke of York in hope that she could fulfil her ambition of becoming Queen as the wife of David. There was an announcement that the Prince of Wales was to become engaged to the daughter of a Scottish Earl with homes in Scotland and England, the only person who could have told the newspaper was Elizabeth herself.

After this failure she accepted the Duke of York’s third proposal stating that she was not in love with him, it was her duty! Once a member of the Royal family she ensured the Prince of Wales’s abdication by devious means and telling stories to ruin the once happy relationship between son and father.

There is no evidence to support this claim, which is a little outrageous, don’t you think?

There is plenty of evidence to support Elizabeth Bowes Lyon’s desire to marry the Prince of Wales. Read my new book to be published in 2017. ‘Edward, Prince, King and Duke.’

Actually if you read some of the bios on Gloria Vanderbilt and her mother and mother’s twin sister along with Wallis bio and others of that “jet set” circle of Society, you will find that Historian is correct. That was just the way things were done back then: women set their hat for the best possible, most prestigious match and if that didn’t work out, they went for second choice. Love was usually something that came along after the wedding in such cases.

I never thought David sounded like much of a catch as far as his personal attributes went. He was too much of a Party-Hound, not serious enough like Queen Elizabeth’s father was. Elizabeth Bowes-Lyon ended up with the better brother who was better husband material and who eventually became King so she won out after all!

I always thought a lot of the Queen Mother and believe that Queen Elizabeth II learned much of her charisma and charm from her.