The Duchess of Cornwall visited 5th Battalion The Rifles (5 Rifles) in Bulford, Wiltshire, on Monday, in her capacity as the regiment’s Colonel-in-Chief.

The Duchess of Cornwall took over the role in July from the Duke of Edinburgh. To mark the occasion, there was a short ceremony at Windsor Castle and Highgrove House – also one of Prince Philip’s last public appearances before his death.

This is the first time The Duchess of Cornwall has made a visit to 5th Battalion The Rifles, since taking up the new position.

During the visit, the Duchess presented five Riflemen with Long Service and Good Conduct medals and thanked them for their service.

Camilla met with the Riflemen and officers to talk about the demands of their recent deployment to Estonia. The battalion has recently returned from a seven-month operational tour to Estonia.

Wearing a green coat with black buttons and a Rifles brooch, Camilla heard how the group were instrumental in the success of the Battalion in Estonia, providing unwavering support. 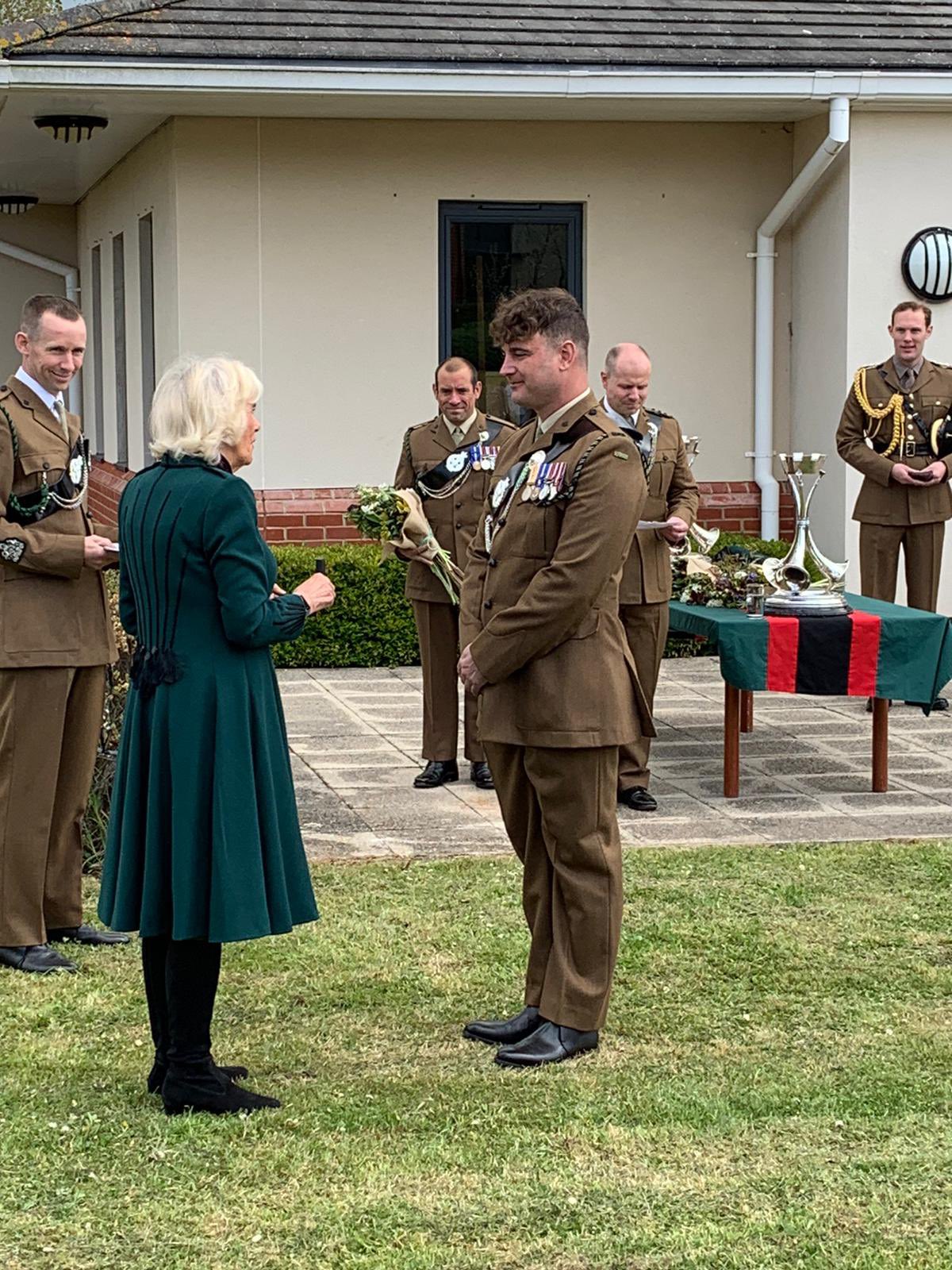 The Duchess of Cornwall issued medals to five of the riflemen. (@Clarence House/Twitter)

The Duchess also met the wives and families of those serving and learn of the challenges that they have faced during the Battalion’s most recent deployment.

Her Royal Highness also spoke to Riflemen who were at the Duke’s funeral and formed part of the Guard of Honour at Windsor Castle.

Speaking at the event Her Royal Highness said: “It is a huge pleasure for me to come back to Bulford which I know pretty well from my role a Royal Colonel of 5 Rifles.

“It is particularly nice to come back and meet you all for the first time and really to thank you for all you have been doing, especially your tour of Estonia which I know was very challenging.”

The Duchess tells the 5 Rifles she is “proud to be their Colonel-in-Chief” during today’s visit.@RiflesRegiment pic.twitter.com/O7vZoHhn34

— The Prince of Wales and The Duchess of Cornwall (@ClarenceHouse) May 7, 2021

Camilla continued: “I also wanted to particularly thank all of your families and partners for literally keeping the home fires burning whilst you were away and also to the Rear Party for doing such a fantastic job in keeping morale up.’

‘I would like to say how proud I am to be your Colonel-in-Chief and I hope this is the first of many visits.’

Her Royal Highness also spoke to Riflemen who were at The Duke of Edinburgh’s funeral and formed part of the Guard of Honour at Windsor Castle. Among the soldiers The Duchess of Cornwall met was Colour Sergeant Jerry Wiredu, who was in the Quadrangle at Windsor Castle for Philip’s funeral at St George’s Chapel.

Sergeant Wiredu, who was born in Ghana, joined the Army 13 years ago and spoke about being asked to represent the regiment at the funeral: “It was the greatest honour to be part of it because he was our Colonel-in-Chief of our regiment and he had handed over duties,’ he said. “It was one of the last he handed over and it was the last public engagement he did.

“To be in the group of the “special relationship” which he handpicked on such an occasion was heartwarming. I was in the Quadrangle with the Royal Navy, the Royal Air Force and the Army. The Army was made up of units that he handpicked to be there.”

The Sergeant who had recently returned from Estonia continued: “I am from Ghana and I am a citizen of the Commonwealth, and have watched him over the years and seen his contribution to the Commonwealth and the Duke of Edinburgh Award, of which there are many beneficiaries in Ghana. I was awestruck to be there to represent the regiment and Ghana and the Commonwealth.” 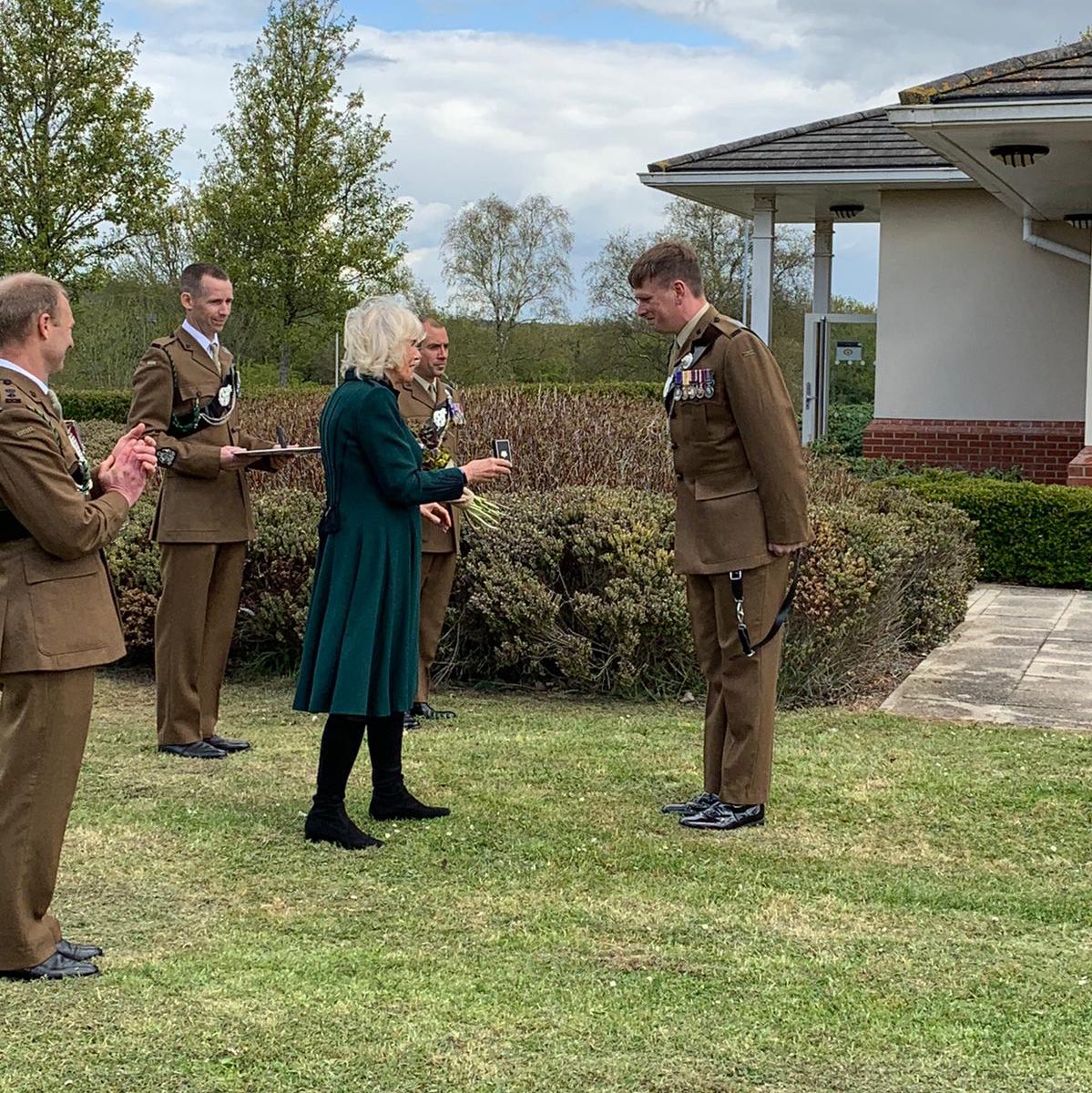 The Duchess of Cornwall took part in an outdoors socially-distanced ceremony. (@Clarence House/Twitter)

Commanding Officer, Lieutenant Colonel Jim Hadfield said: “It has been an extremely busy year for your 5th Battalion what with the preparation and deployment to Estonia.

“This gives me the perfect opportunity to publicly say thank you to everybody here and all those members of the Battalion and their families who are not here for all that they have done.

“It means a huge amount to us for you to visit your regiment, it has been an absolute honour to have you with us today.”

In September 2020, The Duchess of Cornwall met the 1st Battalion, the Rifles. She spoke to Riflemen who had recently completed their initial training course in Catterick, and are now undertaking further training before they join their battalions. It was Camilla’s job to present The Rifles Coin, socially-distanced, to the best Rifleman from the overall training course.

The Duke of Edinburgh, who passed away in April, had been closely associated with The Rifles and its earlier regiments for almost 70 years up until his retirement from public duties in 2017.

The Duchess of Cornwall also has a history with The Riffles. Since 2007, Camilla has been Royal Colonel of 4th Battalion The Rifles, and she continues to hold the position.