The Duchess of Cornwall today paid tribute to the hardworking NHS staff and volunteers, whilst visiting to a vaccination hub at St Paul’s Church in Croydon. She also provided an update on The Duke of Edinburgh, in her second face-to-face engagement of the year.

Greeted by Dr Agnelo Fernandes, GP lead for Croydon, and Gillian Borthwick, Lay Minister at St Paul’s Church, the Duchess got to work as she spoke to staff, thanking them for their efforts in keeping people safe.

Appearing in good spirits, given her 99-year old father-in-law is currently in hospital, she jokingly asked staff: “Have you had anyone sitting down and then legging it out of the room yet? No? Good.” 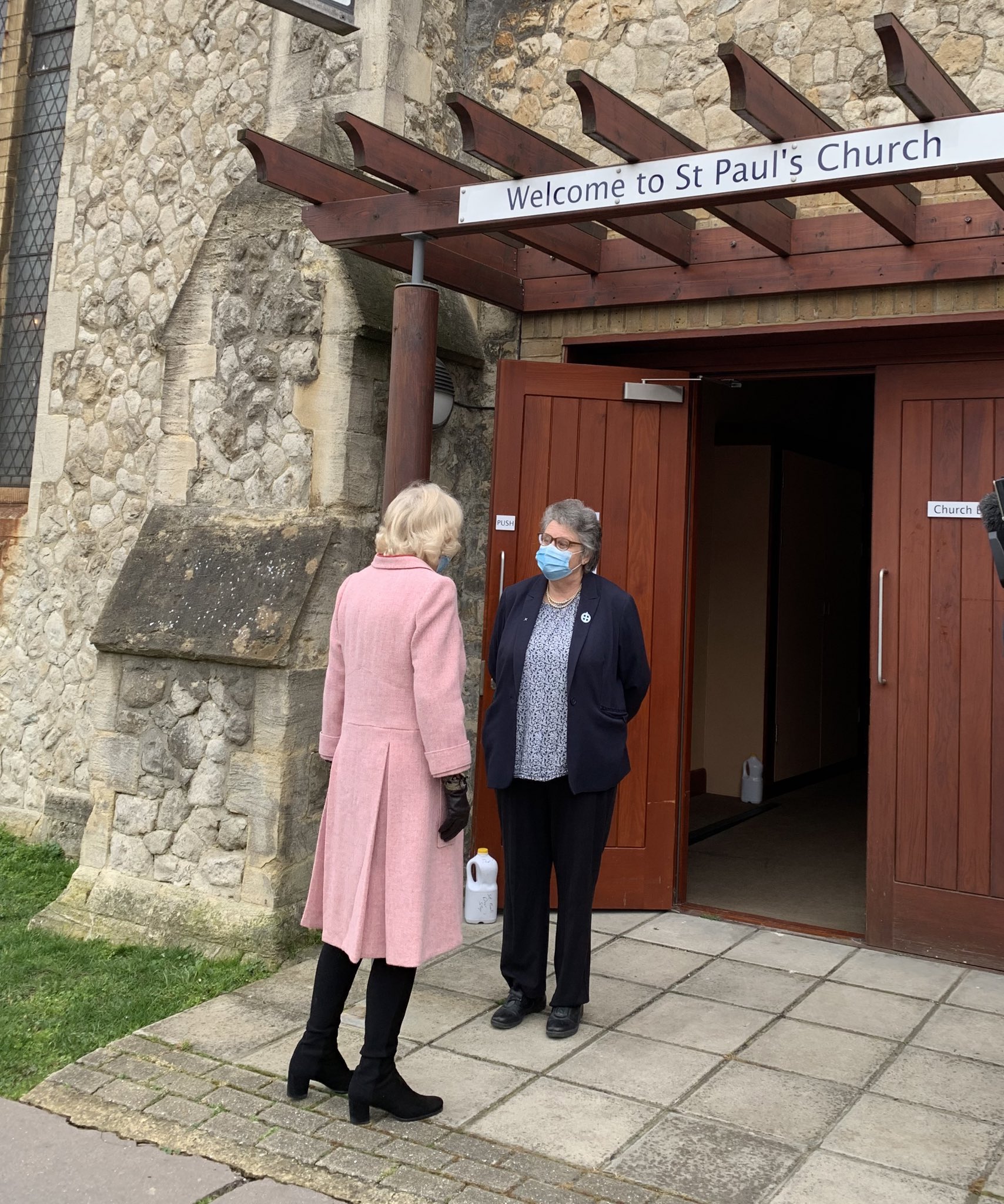 The Duchess of Cornwall being greeted by Lay Preacher Gill Borthwick. (Clarence House/Twitter)

Having previously visited the vaccinations centre at Wembley and Birmingham, Camilla spoke to the staff about their main problems with the vaccination rollout programme. She heard how misinformation was an ‘issue’ and social media was to blame.

“The misinformation put out there – it just helps talking to your friends and colleagues about how easy it was.”

She continued: “It may encourage them. It’s good to see the community leading by example.:

Misinformation regarding the Coronavirus vaccination is a topic The Duke and Duchess of Cambridge highlighted in a recent virtual engagement. The Queen additionally gave her support for the programme, urging people to ‘think of others’ so it appears the Royals are united in sending a pro-vaccine message, which it seems is the official route to suppress the virus. 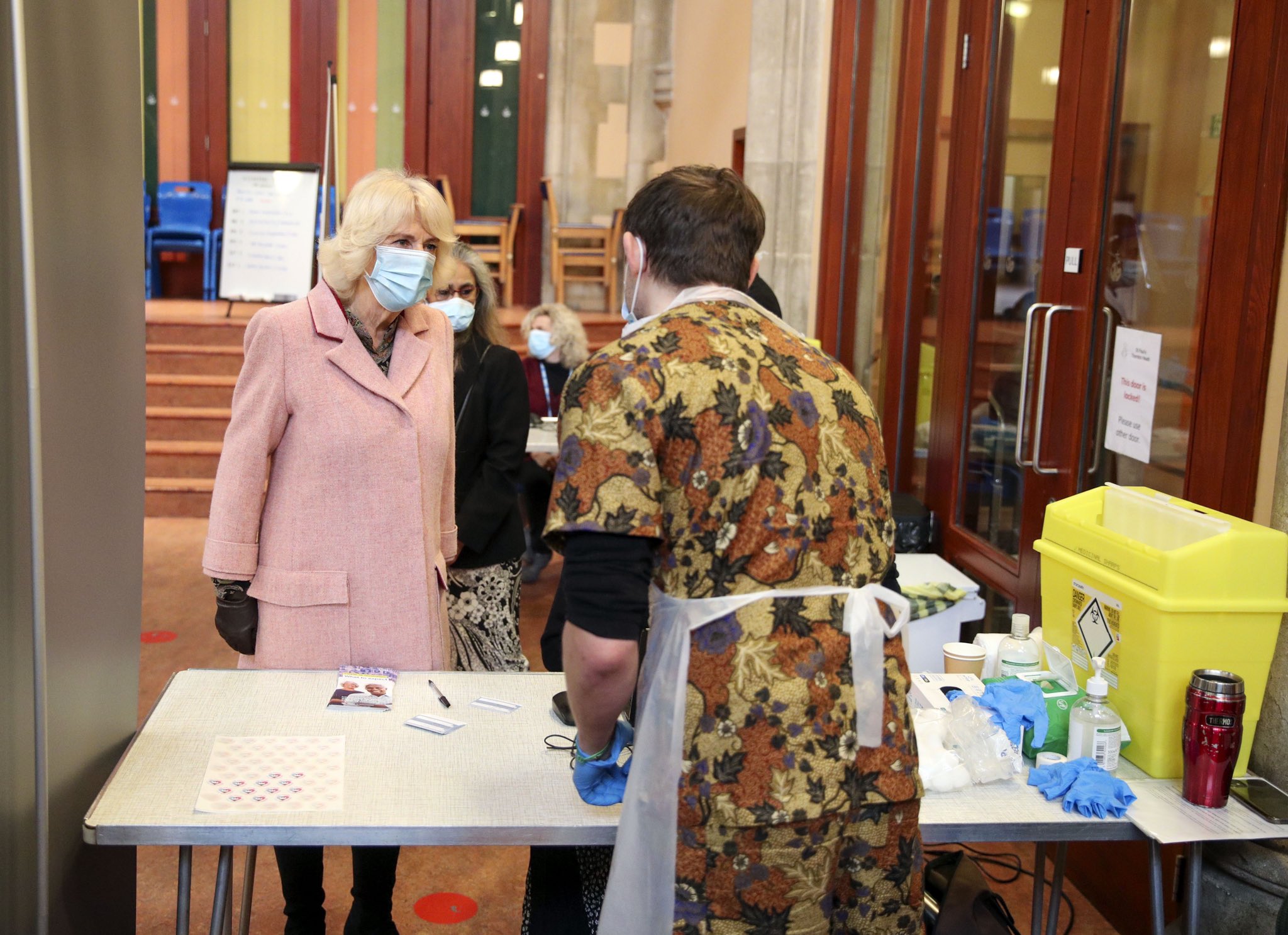 The Duchess of Cornwall spoke to those involved with the vaccination process at St Paul’s Church in Croydon. (@ClarenceHouse)

Camilla spoke to Sabina Eze, a frontline care worker, who told the Duchess she had put off having the vaccine as she was scared of needles.

“I am really afraid of needles but all my colleagues have been pushing me to do it, so here I am. I have to do it now. It’s the responsible thing to do,” Ms Eze said.

The future Queen Consort reassured the patient by talking about her own experience receiving the vaccination, where she described the injection as painless and suffered no side effects. Camilla received her jab alongside Prince Charles in February.

During the visit, The Duchess of Cornwall spoke to Anne Sheehan, a volunteer receptionist at the centre, who asked about Prince Philip; The Duke of Edinburgh has spent 15 nights in hospital, which is his longest stay under observation due to illness.

The Duchess replied his condition has ‘slightly improved’ and the family are keeping their ‘fingers crossed’.

It was only last week The Earl of Wessex said his father was feeling ‘a lot better’ and frustrated at being cooped up in hospital, before being moved to Bart’s on Monday. 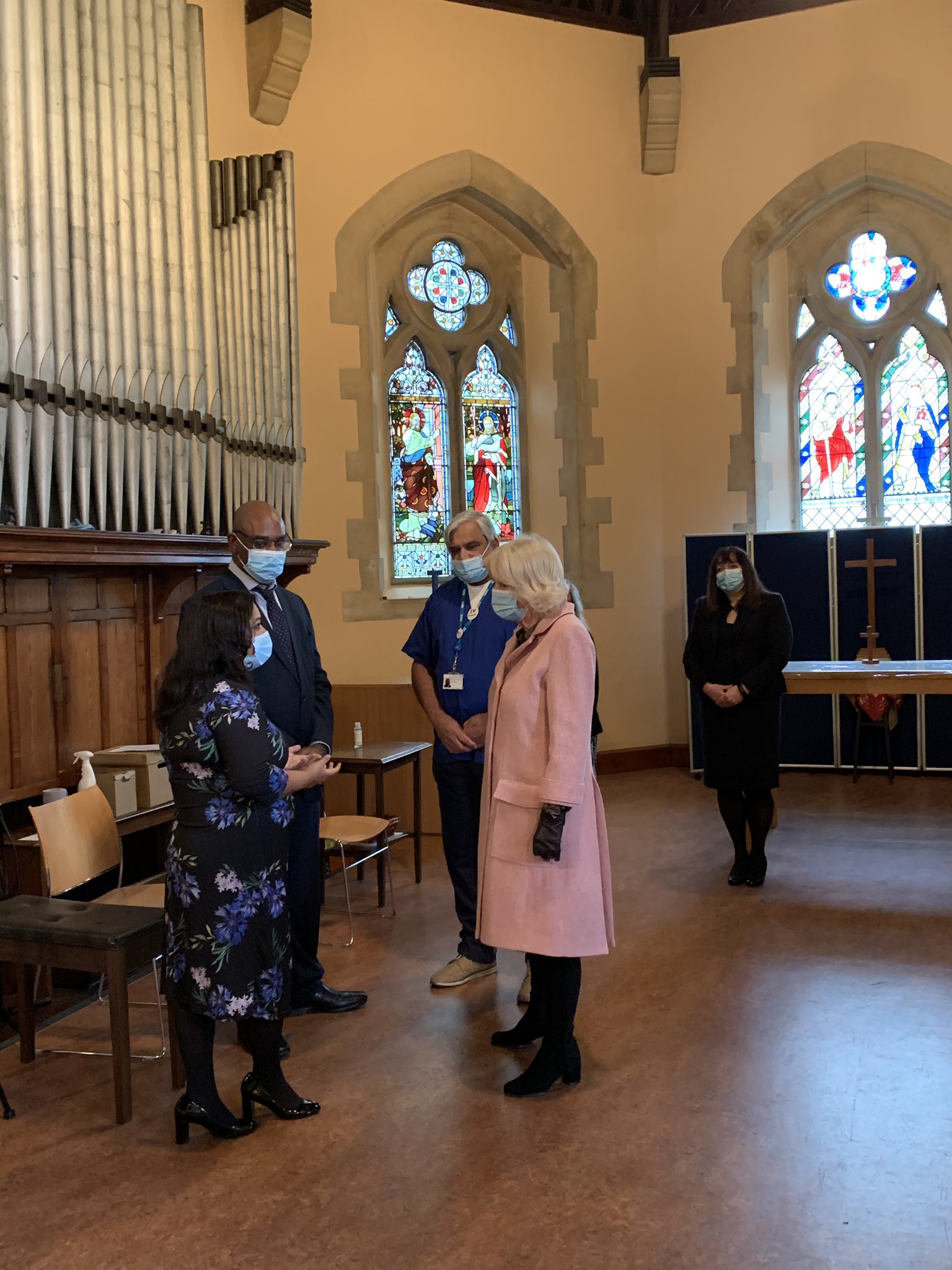 Speaking to volunteers and NHS staff, The Duchess heard how misinformation has played a huge part in the uptake of the vaccine. (@ClarenceHouse/Twitter)

11 local GP practices in the area have come together as part of two Primary Care Networks to run the vaccination centre. The Duchess, who has been a massive supporter of the NHS, heard from Dr Fernandes how the practices had done a tremendous job in getting the vaccination process up and running.

“It’s not easy because this is a deprived area and we have a high ethnic population as well. We have a high degree of hesitancy as well. But despite that we have been doing really well.”

He said the practices were dealing with a rate of around 30% of people did not wish to have a vaccine.

“We are working on different ways of combating this, with community leaders and faith leaders, giving them information to make an informed choice. There is so much disinformation and conspiracy theories. I am on several BAME groups and what is out there, particularly on social media, is just shocking,” Dr Fernandes added.

Prince Charles highlighted a similar notion, where he spoke of his concern about the ‘variable uptake of the vaccines’ among ethnic minorities in the UK during an online webinar.

“She spent some time talking to the practitioners, those in the queue waiting for their jabs and visiting the individual  cubicles.

“It was especially nice as the church is celebrating 150 yrs this year. Everyone in the centre is working as a team and it’s a joy to be part of that and to truly be a church in the community.”

While visiting a vaccination centre in Croydon, the Duchess of Cornwall was heard saying that Prince Philip's hospital treatment 'hurts at moments', but his condition was 'slightly improving'. pic.twitter.com/WIC5nNw5dJ