Standing alongside the Prime Minister, WWII veterans and their families, the republican stood silently as everyone else sang ‘God Save The Queen’, as Prince Edward attended on behalf of The Queen. 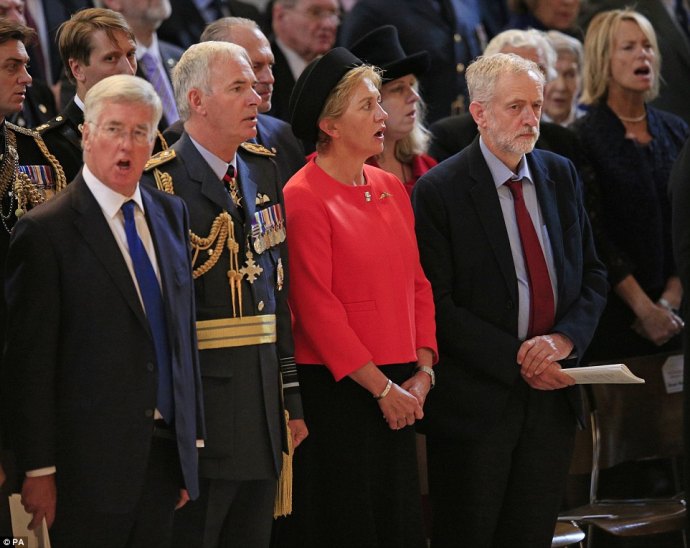 Pacifist Corbyn, who last month refused to take a position on The Queen’s Privy Council if appointed, was dressed inappropraitely for a church service, in a non-matching jacket and trousers suit. He even failed to button his shirt properly, and slouched in his seat; he was branded a ‘disgrace’ by critics.

The National Anthem is a sign of respect to the Monarch, or their representative, when they are in attendance. As the head of the Armed Forces, it is also a natural thing for it to be sung at an event such as this.

Despite his attempt to make trouble as a republican, the 66-year-old has now said he WILL kneel down before Her Majesty, kiss her hand and swear he is her ‘true and faithful servant’. He has previously called for a weakening of The Queen’s powers and to evict Her Majesty from Buckingham Palace.

Today was to honour those who had served our country to protect from Nazi invasion, beginning with the skies, yet Corbyn managed to make it political.

Yesterday, the leader of the Labour party upset his own party, after twice refusing to say if he will twice refused to say whether he would wear the white poppy of the pacifist movement, as chairman of the Stop the War Coalition. It is also uncertain if he will attend the Cenotaph this year, to commemorate Remembrance Sunday.

One MP said: “Decent, patriotic people up and down the country will be appalled if the leader of the opposition turns up at the Cenotaph wearing a white poppy.

“They will not understand it – they will think he is on a different planet. It is deeply offensive to our armed forces, who have given their lives for the democracy and freedoms he enjoys.”

A former shadow Minister said: “It will be seen as deeply insulting – it shows he doesn’t understand the first thing about our armed forces.”

What do you think about what he did today?

Once a jerk, always a jerk.

I think this man’s behaviour is an insult to the country and it’s institutions as well as showing total disrespect to those who served their country, he should be deported

He should be locked up in the Tower of London!

Here in Australia during World War II the waterfront unions refused to load supplies going to our troops. This gutless, traitorous act has never been properly redressed. It shows how the Left are appalling hypocrites and deep down are enemies of freedom, democracy, justice and truth.
This new Labour leader in Britain is simply following the pattern.