Yesterday, The Queen was reacquainted with an old friend of the equine type, when she and Prince Philip opened a school of veterinary medicine at the University of Surrey.

The Royal couple were there to open the new £45 million facility to train budding vets, and were given a tour of the centre, meeting with students studying there.

In the stables, Her Majesty spotted the 24-year-old mare, who served the Royal Household for 16 years, and greeted her as an old friend.

“Home bred!” she said delightedly, remarking how well the mare was looking. “It’s Mary Tudor,” she told her husband.

Mary Tudor was used at numerous State Occasions, including Trooping the Colour and the State Opening of Parliament, and was kept at the Royal Mews. She has found a new home at The Horse Trust in Speen, Buckinghamshire, and is now used to help veterinary students to apply their knowledge and practise their skills.

One student called Her Majesty ‘a natural’ after she patted Mary Tudor, and another said:

“She took her head collar and brought her head round to have a better look. They [The Queen and Philip] both knew her, 100 per cent.”

The Queen and Duke also met Professor Noel Fitzpatrick, star of Channel 4’s The Supervet. Famous for his application of almost-human medicine to the pets we love, including prosthetic limbs, he showed them an intra-bone prosthetic leg. 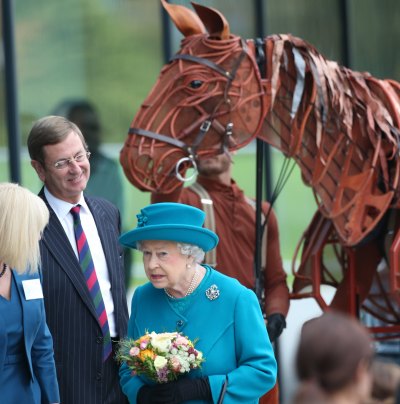 The Queen and the Duke of Edinburgh leaving the new School of Veterinary Medicine at the University of Surrey. Picture by Stephen Lock / i-Images

Prince Philip was on form, pointing to containers of feed next to a group of students working on animal nutrition, asking: “Are they any good? Have you tried them?”

Before they left, Her Majesty and Prince Philip met with another old friend – Joey, the mechanical horse who starred in the West-End productions of War Horse.

During the Diamond Jubilee Pageant on the Thames, the National Theatre and their horse gave Her Majesty a salute, which she was thrilled by.