The Chinese State Banquet will begin in a matter of hours, so we take a look at preparations for the event, as well as the guest list and what you can expect.

The white-tie event (which means tiaras for ladies) is a tradition for incoming Heads of State, with over 170 guests seated in the Ballroom for a Royal feast. It is highly anticipated, though still unconfirmed that The Duke and Duchess of Cambridge will attend.

Guests, alongside senior members of the Royal Family, will include those with ties to China, including ambassadors and businessmen and women. 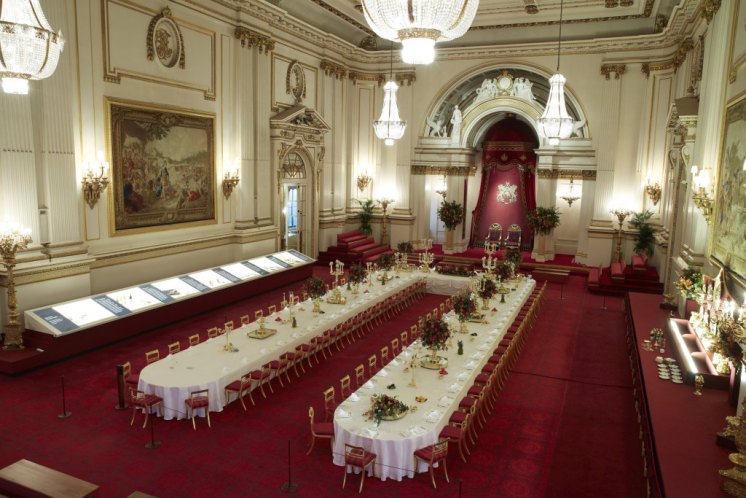 The set-up for a State Banquet is almost finished in the Ballroom – Royal Collection Trust/Her Majesty Queen Elizabeth II, 2015

The table started being prepared on Sunday (yes, it really takes three days to lay!). Guests each have 46cm place settings, with six glasses per person (for water, a champagne toast, red and white wines, a dessert wine and port), with their napkins folded into a Dutch bonnet.

Flowers are specially selected for the event in the Ballroom; this time around they include the Clematis, a native-Chinese plant, a nod to the guests of honour: the Chinese President and his wife.

The food, written in the menu on French, though no doubt a translation available for the guests of honour, gave the visitors a taste of British food. The Palace tweeted this picture of preparations, showing aubergine and spring onions.

Preparations begin in the Royal Kitchens at #BuckinghamPalace ahead of tonight’s #ChinaStateVisit Banquet pic.twitter.com/ZsFtNo8JUw

The Chinese couple are also the guests of The Queen, staying at Buckingham Palace for the duration of their visit.

As usual, Her Majesty came down to check the place settings, menu and flowers a few hours before the event begins.  She will give a toast during the meal, and Xi Jinping will sit to her right. His wife, Peng Liyuan, will sit on The Duke of Edinburgh’s left, the other side of Her Majesty. William and Catherine, who we expect to see this evening, will also sit at the top table, to speak with other important guests of the State Visit.

HM takes great personal interest in the State Banquet preparation-checking every detail from the menu to the flowers pic.twitter.com/1sqkdKnQjT — BritishMonarchy (@BritishMonarchy) October 20, 2015

When The Queen stops eating, guests must to, and plates are cleared away. The Queen will begin by talking to Mr Jinping, and then allow the President to talk to the guest on his right during the next course; this is standard banquet etiquette.

The last State Banquet was held in March for the Mexican State Visit. The President’s wife, Angélica Rivera, chose to not wear gloves, a slight etiquette faux pas.

The last State Banquet held was in March, for the President of Mexico and his wife (who didn’t wear gloves!) pic.twitter.com/mvosfQO6r3

Republcian Jeremy Corbyn will be attending the banquet tonight. Let’s hope he chooses to dress appropriately.

Speculation has been rife this summer that Catherine, Duchess of Cambridge, has been awarded the The Queen’s family order – a little yellow ribbon complete with miniture portrait of Her Majesty, given as a personal gift to those who have personally served The Queen.

Will we see it later?

21:00: The Duke and Duchess of Cambridge have arrived at the Palace

William and Catherine arrive – the Papyrus tiara and an orange dress! via @RegalEyes pic.twitter.com/FZB39drpl2

Over 100 candles in silver-gilt candelabra, many from George IV's reign, are lit before tonight's guests arrive pic.twitter.com/vayHiEGBqK

21:29 Guests begin to arrive at the Palace

The menu is released – turbot and six alcoholic bevarages available.

The Queen gives her speech and toast to Mr Jinping.

Camilla’s dogs feature in her edition of Country Life

Royal Rewind: the wedding of Zara and Mike Tindall

NHS awarded the George Cross by The Queen and Prince Charles