The Welsh Guards were relieved of their duty guarding the royal palaces by the Royal Regiment of the Ghurkas on Wednesday. 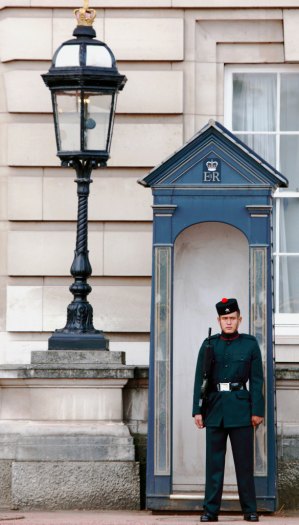 The Changing of the Guard at Buckingham Palace saw two regiments, both of whom celebrate milestones this year, exchange the duty.

The Welsh Guards are celebrating 100 years of service, and were presented with new colours last week, while the Gurkhas have their 200th anniversary of service too.

Other regiments are often asked to guard the Palaces when they have an anniversary such as this, like the Gurkhas will celebrate.

The Nepalese regiment were led out of Wellington Barracks, just around the corner from Buckingham Palace, by the Band of the Brigade of Gurkhas, and took over from the Welsh Guards.

The Welsh Guards wear the traditional red tunic and bearskin, with a leek emblem on their collar to distinguish them from the other Foot Guards; the Gurkhas however, wear green and a small cap with a kukri, an 18-inch long curved knife.

Buckingham Palace, St James’s Palace, The Tower of London all receive this royal protection, and soldiers from each of the units in the brigade will perform this duty on alternate days in May.

The Gurkhas have a relationship with the British Crown dating back to 1815; the brigade’s base moved from Hong Kong to Folkestone, Kent in 1997, but recruits are still taken from young men living in the hills of Nepal.

George V raised the Welsh Guards in 1915 to complete the regiments of Foot Guards to represent all parts of the UK.