A right royal Christmas – how the Royals celebrate

The Royal Family feature in almost every household at Christmas, thanks to The Queen’s speech broadcast at 3pm each year. But how do the Royals spend their Christmas? Do they celebrate just like the rest of us? Read to find out…

Before the festivities begin at Sandringham, the entire Royal Family are invited to Buckingham Palace for a family dinner. The extended family (cousins three-times removed, great-nieces and nephews and their children etc) descend on the Palace, usually the Tuesday before The Queen heads to Norfolk.

The luncheon is for the entire extended Royal Family, since not everyone can be accommodated at Sandringham. It is one of the few chances in the year – along with Trooping the Colour – that the family can gather and interact as a whole, as Buckingham Palace offers the space and catering facilities.

There are that many guests, police officers are often given sheets with photos on, so they can recognise the family and allow the right people in!

The Queen then departs for Norfolk, usually on a public train (but in first class, of course). After arriving at Sandringham, she ensures the decorations in the house are correct, and that the estate has been running well in her absence. It is her job, like it was her father’s before, to put the star on the top of the tree, which comes from the Sandringham estate. Traditional decorations once used by Queen Victoria adorn the tree.

The whole family isn’t invited to Sandringham: while large, the Edwardian mansion cannot accommodate the entire Mounbatten-Windsor clan. Even the servants quarters are used for the minor Royals, such is the squash.

Royals then begin to arrive at Sandringham in order of precedence, with the most senior last, a few days before Christmas. On Christmas Eve, Prince Charles will be the last to arrive.

At 4pm high tea is served in the ball room, an informal gathering for the family to greet one another and catch up, particularly those with young children. Royal cousins are known for their good friendships, and times like this are no doubt responsible for close bonds, began as children. The lunch at Buckingham Palace is so busy there is often not the chance to speak to everyone! 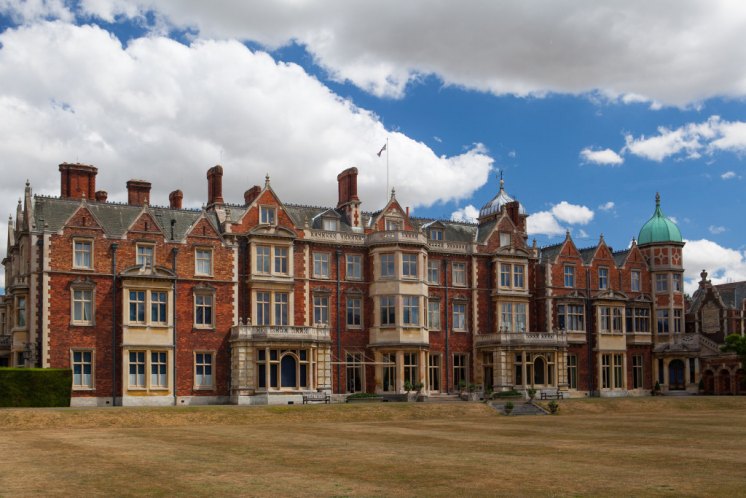 The Queen spends Christmas at Sandringham, and puts the star on top of the tree.

For the Royal Family, Christmas actually takes place on Christmas Eve. Following the German tradition, imported to Britain by Prince Albert, gifts are opened on evening of the 24th, and for the adults, these are joke presents – after all, what do you get for the family with everything? Princess Anne reportedly bought her brother, Prince Charles, a white leather toilet seat a few years ago – he apparently loves it so much, he takes it abroad! Harry, meanwhile, previously gifted his grandmother a shower cap with ‘Ain’t life a bitch’ on it!

The now-Earl of Snowdon, son of Princess Margaret, has described the event as ‘uproar’, with children playing, wrapping flying off presents and a lot of laughing.

Royal children receive ‘normal’ presents of toys and books. They often get their first fishing rod or outdoor equipment for hunting.

The first service of the day is an informal one, without hats. Here is The Queen arriving in 2014 for the morning service. I-images

A candle-lit supper follows the presents, focussed around local produce, including game or lamb from the estate, and often locally caught fish or seafood for the second course.

Christmas Day always starts with a church service, relatively early, around 8.30am. This is an informal event, with pictures showing the Royals greeting The Queen, who does not wear a hat.

Not content with just one visit to church, a second formal service takes place before lunchtime – it is Jesus’ birthday after all! The family walk from the ‘big house’ to St Magdalene’s church, allowing the public to see them, and for the press to take photos. These are the pictures that make the news and papers.

The Family walks to church on Christmas Day from Sandringham House, while The Queen is driven. I-Images

The Queen is driven from the house, while The Duke of Edinburgh joins the family to walk – even at 94!

Wellwishers give the Royals flowers and cards outside after the church service. The Duchess of Cambridge greets the public in 2014. I-images

It is then time for Christmas lunch, served at 1.30pm. It is a tightly scheduled event, lasting 90 minutes, so that everyone can then watch Her Majesty’s Christmas Broadcast. The Queen leaves and watches her Christmas message on her own, while the family gather round the TV – with a tipple, according to Mike Tindall!

This message is filmed some time in November, and reflects on the years events and a Christian message of peace, unity and brotherhood – The Queen is head of the Church after all, and is spotted attending church almost daily throughout her Norfolk stay.

A formal dinner, where the Royals don their fineries (no tiaras though) is the high point of the day. This is then followed by an evening of games, a favourite being charades. It is said The Queen is an expert at impersonating Prime Ministers and Presidents…!

It is thought bad form to go to bed before The Queen of an evening, and she usually retires about midnight on Christmas Day. This is also the only day on which Her Majesty does not have a red box of government papers to read, check and sign off – truly a once-in-a-year treat for The Queen.

Reports often count five outfit changes on Christmas day for the Royal Family: one for the first church Service, and another (with a hat) for the second; a change for dinner, then perhaps out of these formal clothes in favour of something more comfortable. Unless The Queen has another change in the day, it is just three or four changes.

The Duchess of Cambridge has somewhat interrupted royal tradition to spend time with both the Royals and her own family at Christmas. In 2015, the Middletons were invited to church on the 25th, and back to the house for lunch, but then went to Anmer Hall with William and Kate to spend the rest of the day, while in 2012 the Duchess spent the entirety of Christmas in Berkshire.

The festivities do not end there for the Royals: the same for many families, they continue to celebrate on Boxing Day. Prince Philip normally leads a shoot for the day on the estate, and these birds are then used over the festive period, with the extras often given to those who work on the estate, or sold as part of the Sandringham brand.

Almost every year, The Queen returns from Norfolk just after 6th February. This is accession day, the day when Princess Elizabeth became Queen Elizabeth. This also means that it is the anniversary of her father’s death; George VI died at Sandringham in his sleep in the early hours of February 6th 1952, but despite this, her Norfolk home holds many happy memories for the Monarch.

The Queen lights the Tree of Trees Beacon from Windsor Castle