A set of letters written by Elizabeth I and her courtiers about her captive cousin, Mary, Queen of Scots, has been donated to the British Library.

43 historically important letters have been donated to the American Trust for the British Library by the industrialist and philanthropist Mark Pigott, who acquired them in 2010.

Letter from Elizabeth I to Ralph Sadler, 31 October 1584. (British Library)

Many of the letters were written to Sir Ralph Sadler, who was responsible for the care of Mary, Queen of Scots, at Tutbury Castle for the duration of her imprisonment there, between 1584-85. The Staffordshire castle was one of the Scottish Queen’s last homes.

Four letters are signed by Elizabeth I herself, while others come from William, Cecil, Lord Burghley, Elizabeth’s most senior minister, as well as others from Sir Francis Walsingham, her Secretary of State.

The collection had been on loan to the British Library for a number of years, including a letter from 1584, in which the English Queen criticised the “sundry hard and daungerous coorses heald towardes us” by her cousin, Mary.

“You may lett hir understand that we wish she had been as carefull for the tyme past to have avoyded the cause and ground by hir given of the just jealousy by us conceaved, as she now sheweth to mislyke of the effectes that the same hath (by due desert) bread towardes hir,” Elizabeth I also writes.

Tightening her grip on Mary, Elizabeth also requests that all mothers with young children were to be removed from her household, and Sadler is also told that the royal prisoner is ‘not permitted to ride farre abroad but onely suffered on foot or in a Coche to take the ayre and use some such exercise neere the howse where she shall lye’.

Walsingham writes to Saddler of the Queen’s anger in 1585, ‘that the Queen of Scotts hathe more liberty nowe than at any tyme when she was in the Earl of Shrewsbury’s chardge’.

As suspicion of the Scottish Monarch grew, he was also instructed to ‘have a privie serche sondelie in all places within som Compas of the Castell, so as all strangers to be found in that serche maie be forthecomming’ a few times each month. 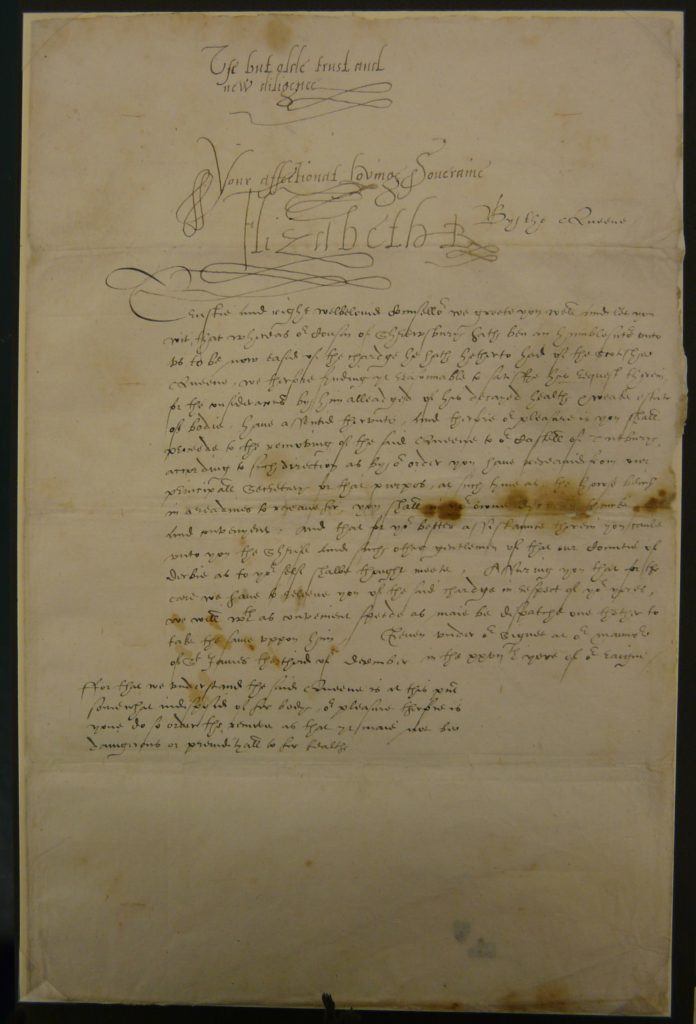 This letter from Elizabeth I to Ralph Sadler in December 1584 forms part of the collection donated to the British Library. She signs it ‘your affectionat loving soveraine’

Pleading somewhat, Mary writes of the ‘great contentment and lyking we had for a tyme of hir [Elizabeth’s] frendshippe,’ and even makes requests for table silverware.

With some evidence of Mary being embroiled in a plot against her, Elizabeth reluctantly had her Catholic cousin – a fellow Sovereign – executed in 1587 at Fotheringhay Castle.

Roly Keating, chief executive of the British Library said, “The British Library is delighted to announce the gift of this important collection of letters, relating directly to one of the most dramatic episodes in English and Scottish history.

“The words of figures such as Elizabeth I, Burghley and Walsingham are a vital part of our shared heritage. The Library and all scholars and students of UK history are grateful to Mr. Pigott and to the American Trust for their vital ongoing support.”

The British Library plans to digitise the letters next year, along with other Tudor documents, and they will be made available for all on the Digitised Manuscripts website.

See the connections between Britain & Russia in...