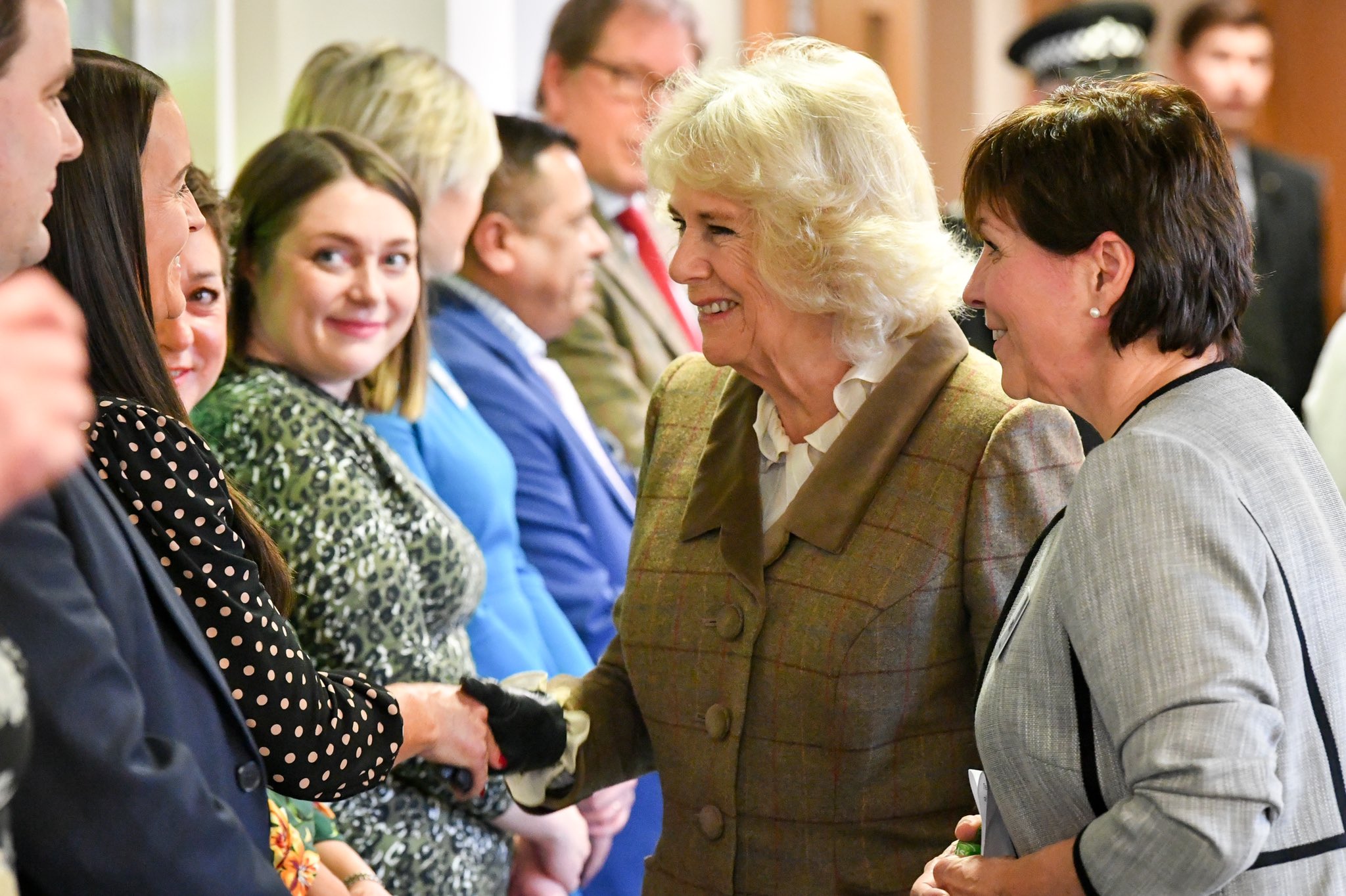 The Duchess of Cornwall yesterday made a visit to Prospect Hospice in celebration of their 40th anniversary, and to unveil a new embroidery designed by Marlborough Embroiderer’s Guild.

Created in 1980, the organisation provides compassionate end-of-life care service for people living in Swindon, Marlborough and north east Wiltshire, supporting around 7,300 patients, carers and family members every year. Camilla has been their president since 2006.

During the visit, the Duchess tried on a virtual reality headset that shows peaceful woodland scenarios to keep patients calm. About her experience with it she said: “Quite extraordinary. I can see you could get addicted to this. It relaxes you, doesn’t it.”

The charity also tries to raise awareness about life-limiting illness and end-of-life care, encouraging conversations about death and dying at businesses, schools and community groups.

The future Queen also had tea with members of the Bereavement Support Group, who have lost relatives supported by the organisation. She told them: “Everybody has experienced the same grief probably so you know exactly how everyone else feels. I think it is such a good idea to have group therapy to let it all out.” 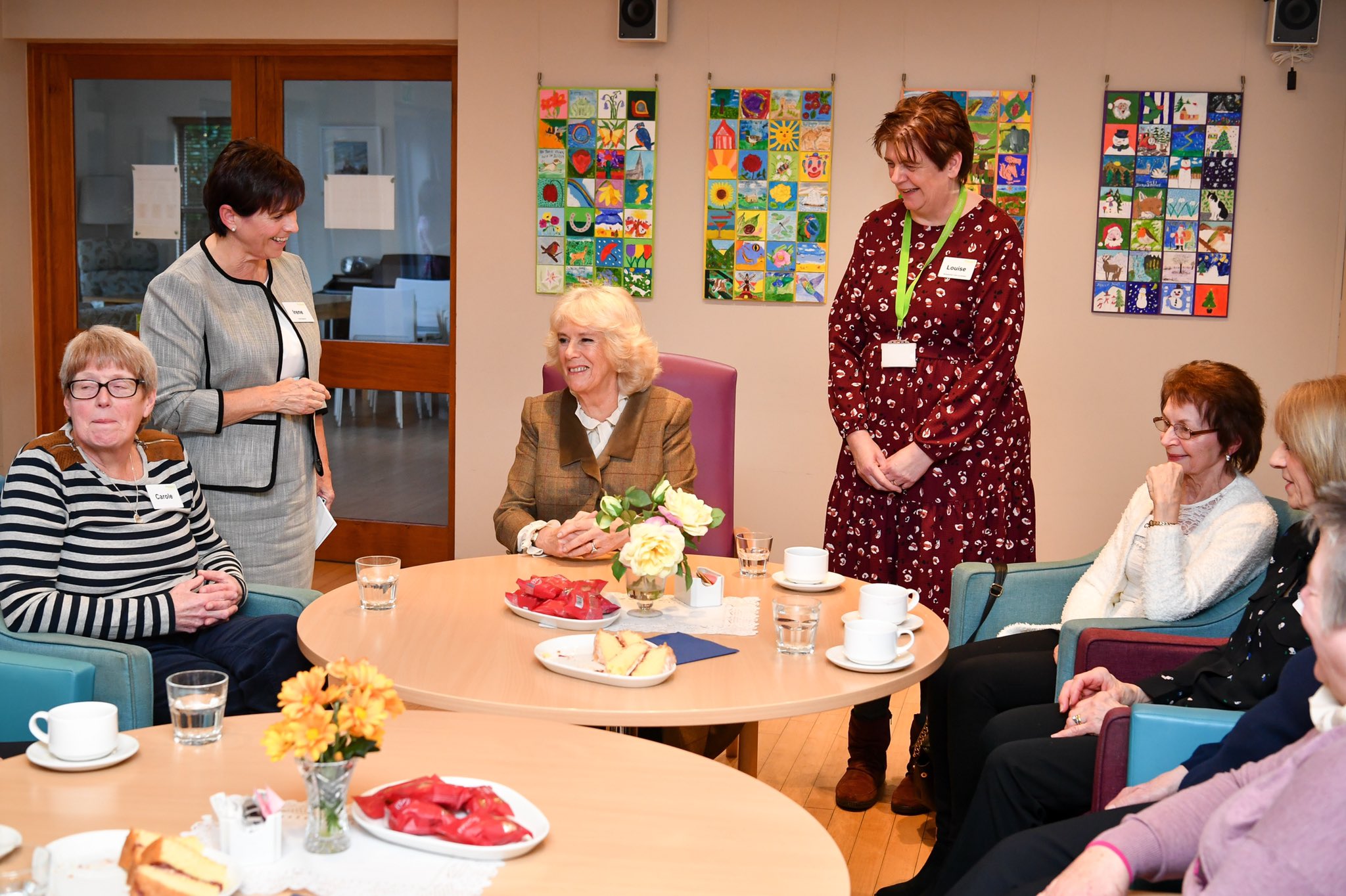 Over tea, Her Royal Highness meets members of the Bereavement Support Group, who have lost relatives supported by @prospecthospice.

The local charity supports a community of more than 300,000 people in Swindon, Marlborough and North East Wiltshire. pic.twitter.com/adIEkOFY7B

Camilla also helped Prospect CEO Irene Watkins to unveil a large embroidered scene, which was hand sewn and will decorate the hospice. The piece has taken over 30 women from the group four years to complete; the piece depicts Savernake Forest in Wiltshire.

Part of the visit also saw the royal visitor cut a cake to mark the organisation’s 40th birthday.

At the end of the visit, Camilla was asked if she will miss Prince Harry and Meghan, The Duchess of Sussex when they step back from royal duties, to which the Duchess replies with “Of course”.

HRH The Duchess of Cornwall was welcomed by Mrs Irene Watkins to the celebration of 40 years of Prospect Hospice in Wroughton and unveiled a beautiful embroidery of Savernake Forest. @prospecthospice pic.twitter.com/HvTFwaDGrl

Last Saturday, it was announced that the couple will no longer attend official engagements and stop using their HRH style. It’s also understood that Harry and Meghan will now spend most of their time in Canada, rather than a split with time in the UK. Their new work model, not performing any official duties and freedom to pursue commercial deals, will start this spring.

About her visit, The Duchess of Cornwall said: “I know everybody thinks you’re going to come into a hospice and its going to be a sad, depressing place but it is always the opposite. It is uplifting and Prospect is certainly one of the most uplifting hospices I’ve been to and I’ve very proud to be its patron.”