To mark International Day of the Midwife 2021, The Duchess of Cambridge has carried out an interview with Harriet Nayiga, founder and director of Midwife-led Community Transformation.

As Patron of Nursing Now, Catherine carried out an interview, which forms part of a special set of articles to celebrate the three-year initiative, which comes to a conclusion this month.

During the interview, the Duchess was interested in hearing about healthcare in Uganda, asking if women have children at their homes or if they go to hospitals as part of their routine.

Harriet shed light on the situation highlighting how they don’t have home births in Uganda due to a lack of resources. She noted how sometimes women accidentally give birth at home or on the way to the hospital due to the distance involved in travelling.

The Duchess of Cambridge carried out an interview with Harriet Nayiga, founder and director of Midwife-led Community Transformation, to hear about midwifery in Uganda. (Nursing Times/Kensington Palace)

She continued: “I felt that I had to come and bridge this gap before the women reached me [her] with serious complications. Midwives are in a position to provide preventative initiatives on the ground before the complications have arrived or have emerged. This is the challenge that Midwife-led Community Transformation (MILCOT) is solving.”

Intrigued by the ‘fantastic initiative’ MILCOT, Catherine asked about how the organisation was founded and the impact it has had on the people of Uganda.

Harriet founded the initiative after working for an organisation which took care pregnant teenagers in crisis. She was ‘caring for them day and night as a house mother and a midwife’ and  ‘comforted them because many of them felt stigmatised’. Through this, she realised the challenges the young girls were going through. Harriet noted the traumatic moments she had experienced which impacted her to start the initiative. It was moments like this where she was sent to the community ‘to help young girls like this and provide the information they need to prevent this.

Harriet told the Royal how the initiative currently serves Nansana Municipality, which is under one big district, Wakiso. Within that community, Community Transformation have about 12 villages, but they are concentrating on five that are close to them. The organisation has noticed a huge demand in other villages and also across the country and are currently looking for plans to expand.

The Duke and Duchess of Cambridge have spoken to a range of frontline healthcare workers including nursing students about their work during the pandemic and how they have coped with their mental health. (IMAGE: Kensington Royal/Twitter).

Throughout the pandemic, The Duchess of Cambridge, alongside her husband, has been carrying out engagements in supporting frontline healthcare workers, and has seen the effect the pandemic has seen on the mental health of works. The mother-of-three was particularly interested to hear how the organisation and Harriet have managed whilst being ‘under huge pressure’ throughout the pandemic.

Harriet replied: “Usually we do community outreach, we go to the community and reach out to check on them, but when Covid came we could not do it, especially during the lockdown. These key populations could not even get spare money to buy a mask. With funding support, we were able to respond to their needs.

“We brought them sanitary pads, we made them masks, we gave them food and also detergent, because they could not buy soap. The only way we could reach out to them was via phone calls to check on them and how they are coping. And then it’s only to those who have phones.”

Catherine has a particular interest in the early years of childhood and the mental health of the parents. This was an aspect that shone through during the interview when Catherine asked if parental mental health was ‘part of the conversations you’re having with some of the families and the mothers, because that’s been put under a huge amount of pressure as well?’

Harriet replied: “Yes, some of the women are going through what we call intimate partner violence. She’s facing violence from her partner, the partner is not providing, the partner abuses her, beats her.

“Others who are doing sex work, they find a lot of abuse from the men they sleep with – so they are all stressed, they have depression. We have provided group psychotherapy and we assess the level of depression.

“We are able to empower them, so they can set up small scale businesses to support themselves. Mental health is very important in the community and we have to prioritise it. I advocate that we centre on mental health, and it is a component [of our support] we cannot leave out.” 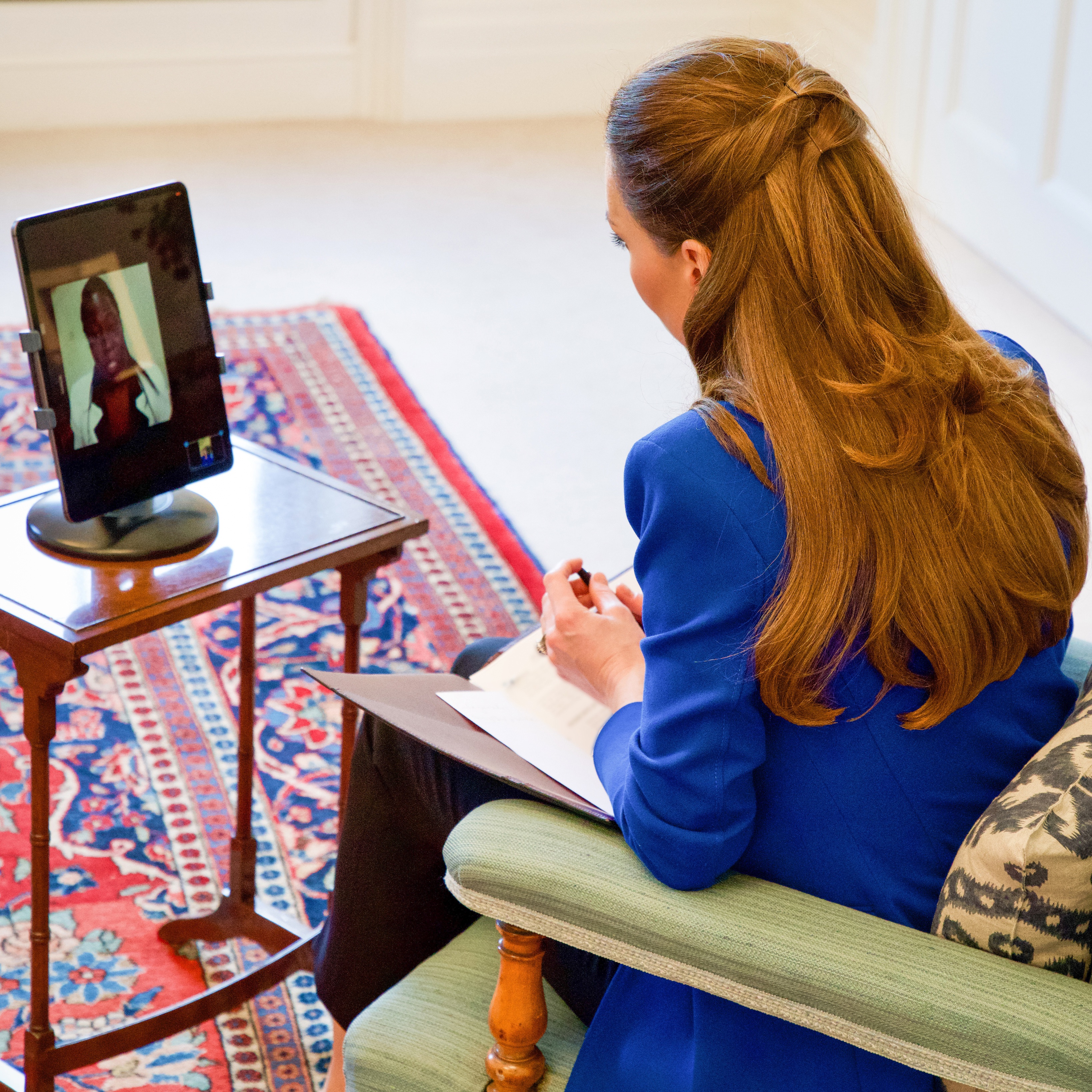 Catherine heard how the importance of mental health in the parents plays a key role in Harriet’s job. (@KensingtonRoyal)

Harriet was asked about extra support she feels is needed the most in the communities, she noted how it was important to have good transport facilities as she can find herself walking to reach the women who need the help.

She also added how she needs funding and human resources as the team are currently working on a voluntary basis and it would also mean they can have the resources and information to help women gain all the possible help. She admitted: “I struggle a lot, however, I love what I do. I’m standing as a midwife to empower others.”

The May edition of @NursingTimes is a special issue, with a cover chosen by The Duchess of Cambridge, that celebrates the work of Nursing Now.

Asking how important her patronage had been for Harriet and Community Transformation and the importance of initiatives like this are for the midwifery profession, Harriet noted how Catherine’s patronage has had a global effect on the initiative.

Harriet says Nursing Now gave her the exposure to the entire world after attending a number of events including the World Health Assembly, which exposed her to a ‘great network of connections’. She had the opportunity to meet a range of people including the director-general of the World Health Organisation, which has built her confidence in the work she is doing which has shown her to be ‘very important and very needed in the world’.

She added: “I’m supporting nurses and midwives not only in my country but also from other countries, who contact me for advice on how to start community-based initiatives.”

The Duchess of Cambridge concluded her interview with Harriet by applauding the work she is doing and notes that she would love to be able to see the work first-hand one day.

PrevPrevious articlePrincess Charlotte is all grown up in 6th birthday photo
Next articleDuchess of Cambridge promises to wear pink dress when she meets Hold Still subject, MilaNext