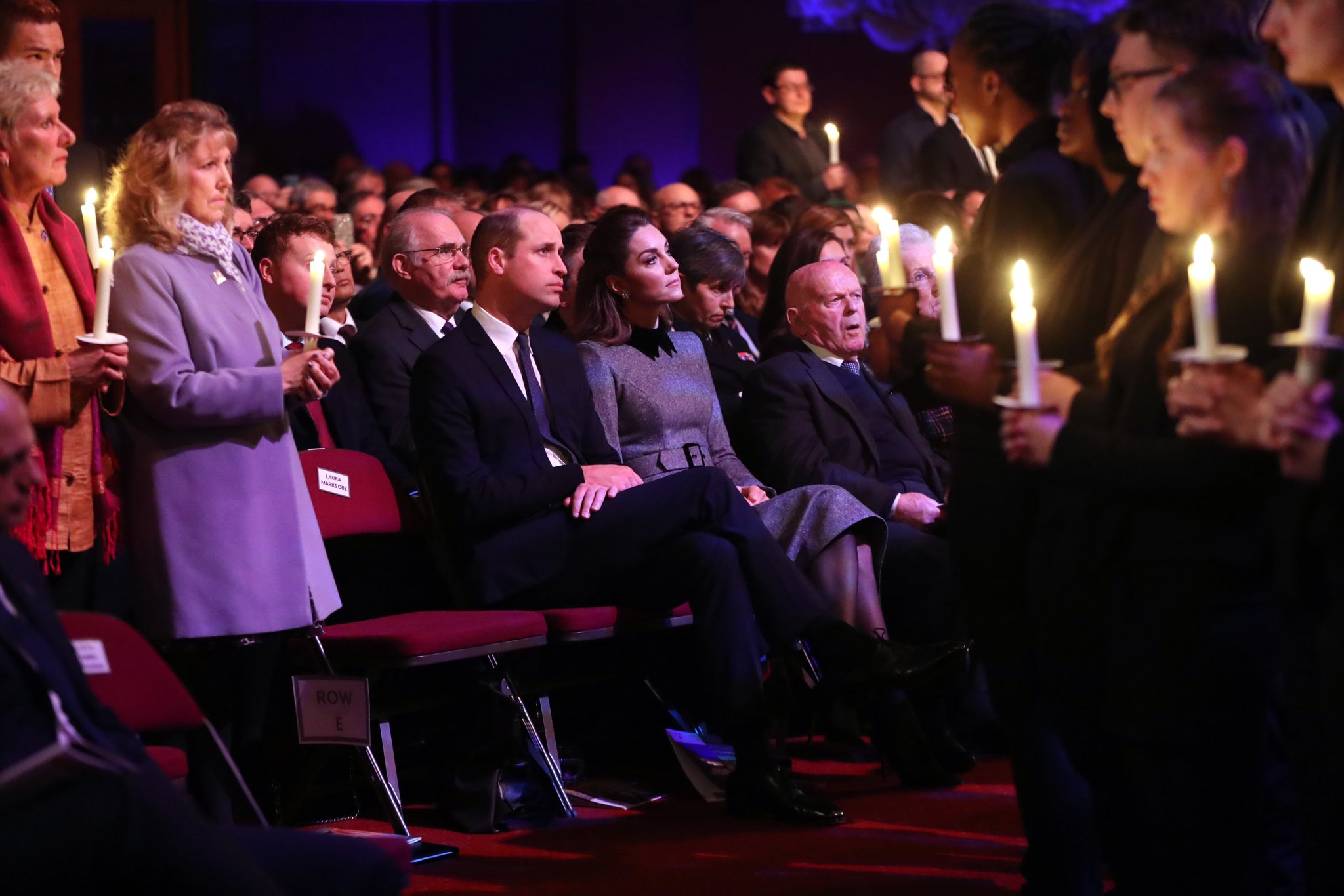 It was a cold, wet, grey and sombre London afternoon that greeted The Duke and Duchess of Cambridge as they arrived at Central Hall in Westminster yesterday.

They were there to honour Holocaust survivors as they marked the 75th anniversary of the liberation of the Auschwitz-Birkenau concentration camp, where more than 1.1 million Jews came to their deaths, as well as to commemorate Holocaust Memorial Day. The day has been observed in the UK since 2001 with over 10,000 local activities taking place on or around this date every year since; Prince Charles has been patron of the event for three years now.

The heartrending ceremony reflected on one of the darkest periods in human history, when 11 million victims – including six million Jews – were gassed, shot, and worked or starved in Nazi internment or extermination camps.

The notorious train-track entrance to Auschwitz, through which over a million Jews were taken to their deaths, was eventually stormed by the Russians on 27th January 1945.

Once inside the auditorium the audience and Royals were welcomed by Laura Marks, chairperson of the Holocaust Memorial Day Trust and BBC newsreader Huw Edwards who hosted the televised event.

Laura pointed out the important part the Royals have been playing in the commemorative events saying: “We’ve had The Prince of Wales at Yad Vashem and today The Duchess of Cornwall at Auschwitz and having the Duke and Duchess here, the message it sends out is how important they consider it to be.”

The Duchess of Cornwall was in Poland for the official international commemoration yesterday.

In deeply moving scenes, audience members wept as Prince William and Kate lit tapers from the candles, using them to pass the light on to others including faith leaders and people from across the UK. 75 candles were lit in total to mark the 75 years that have passed since Auschwitz was liberated.

The Duchess looked deeply touched as the lights in the auditorium were then dimmed. 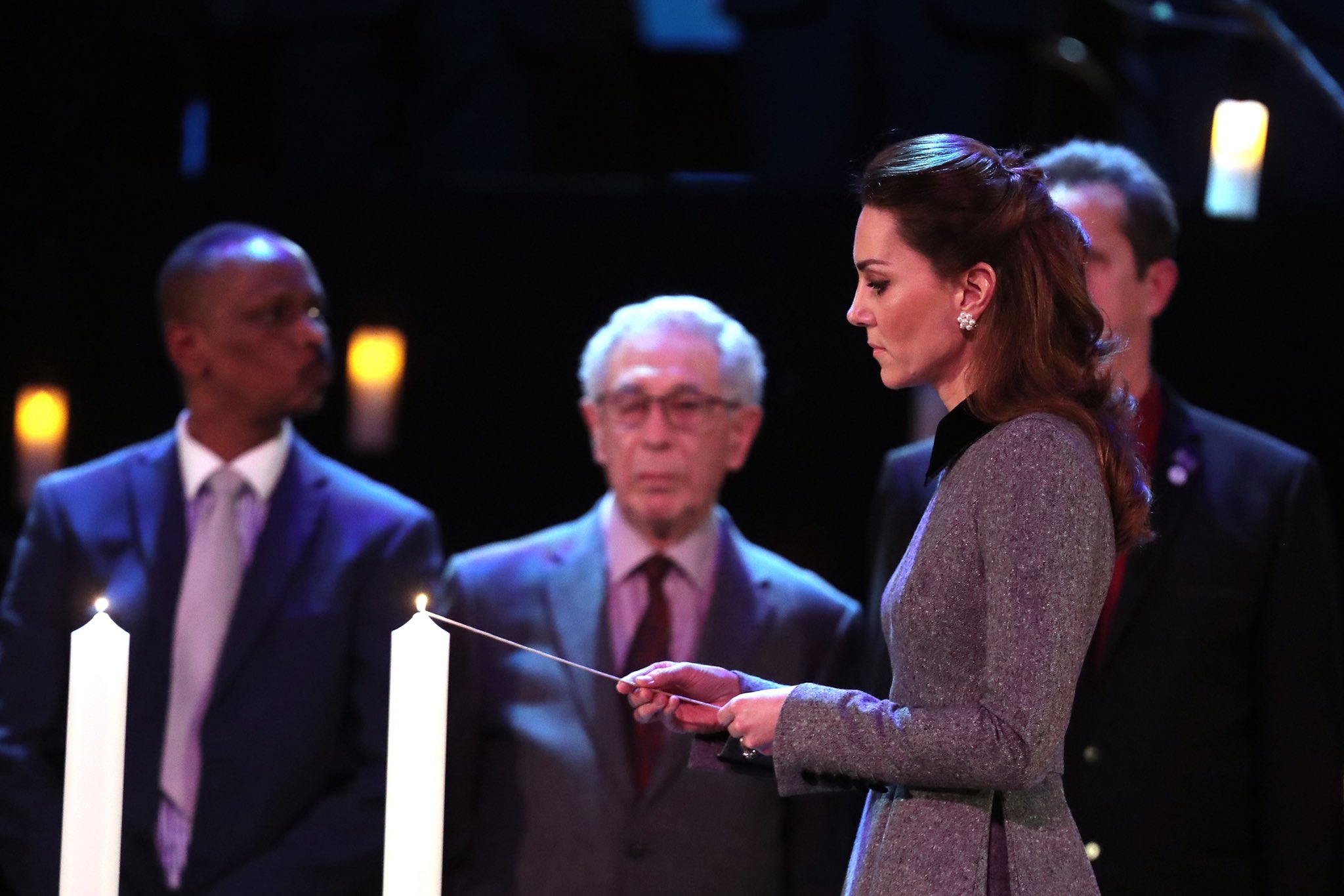 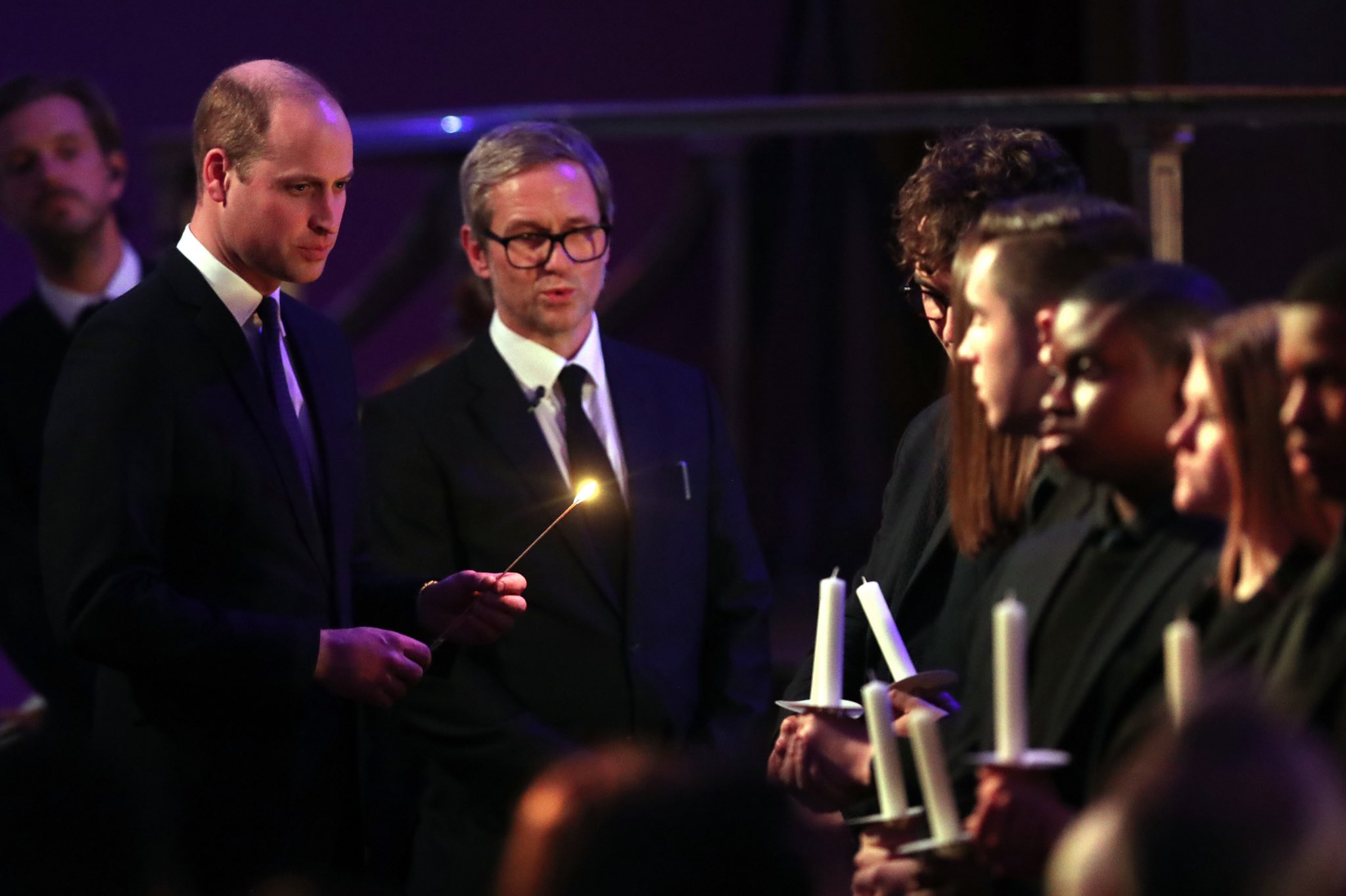 The ceremony heard from Arek Hersh, who was sent into a work camp in Poland aged 11. He survived the Lodz ghetto, forced labour at Auschwitz-Birkenau, a death march to Buchenwald and finally Theresienstadt.

In footage of him at Auschwitz, he recalled: “In January it was –25C. People died in the night and they came in the morning with a little cart to take the bodies out. I never forget. Everyday I think about this place.”

Addressing the service, Prime Minister Boris Johnson spoke of how he felt ‘a deep sense of shame’ that anti-Semitism continues today and vowed to do everything in his power to stamp out racism.

There were moving readings from actresses Nina Wadia and Rebecca Front, before a performance by The Fourth Choir, an LGBT+ Choir from London.

The actors Martin Shaw and Sir Simon Russell Beale also read the accounts of survivors, before the audience heard from Maia Tribich, who survived Ravensbruck and Bergen-Belsen – where she contracted typhus – and Ian Forsyth, a wireless operator with the 15th/19th King’s Royal Hussars in the Royal Armoured Corps, who was among the first troops to liberate Bergen-Belsen in April 1945.

The former soldier said: “There were bodies lying everywhere. When you see people, they looked like skeletons with skin on them. What do you do? I don’t think anyone that didn’t see this would understand what it was like.”

Mala Tribich then appeared on stage to recount how she was taken to Sweden after liberation, before finally being reunited in the UK with her brother Ben – now Sir Ben Helfgott.

She said: “I feel like it is my duty to speak for all those whose voices were silenced and tell of those dark days in Europe. By speaking out it is my greatest hope that something positive will be handed down to future generations.”

Tribich was joined by Ian Forsyth, who wept as he recalled one 11-year-old boy he had tried to look after and who had died at the camp. “I hope people can realise how far mankind can sink if they are not careful,” he said. “We must learn that freedom is for everyone.

“We’re not all the same but that should be celebrated. We need to stand together against oppression. This is the most important lesson I can give everybody.”

Prince William went up to the stage to read an extract from a letter written by a friend of his great-grandmother’s, about Princess Alice’s good deeds. Prince Philip’s mother is remembered and honoured for saving a Jewish family from the Holocaust.  Princess Alice hid the Cohen family in her Athens home after the Nazis invaded and she was recognised by Israel as ‘Righteous Amongst Nations’ for her assistance. She is buried in Jerusalem.

Kate looked on deeply touched as he read: “When the persecution of the Jews by the Germans began, Princess Alice asked to be informed about the fate of the Cohen family.

“Having been informed by friends and by her lady in waiting about the plight of Mrs Cohen and her young daughter, the Princess decided to offer her hospitality to the two ladies; in fact, to hide them in her home despite the danger this entailed.

“The Princess put a small two-room apartment on the third floor at the disposal of Mrs. Cohen and her daughter. It was thanks to the courageous rescue of Princess Alice that the members of the Cohen family were saved.

“The members of the Cohen family left the residence three weeks after liberation, aware that by virtue of the Princess’s generosity and bravery had spared them from the Nazis.

“The great-granddaughter of Rachel Cohen, Evy Cohen, said this two years ago: ‘My family would not exist without the courageous act of Princess Alice. Her story of incredible courage must keep being told in her memory.

“My generation, the past generation and the future generation are, and will eternally be, grateful to his great-grandmother Princess Alice for the great act of bravery, risking her own life to take in a family in need’.”

Two years ago, Prince William visited her tomb on the Mount of Olives in Jerusalem. Last week it was Prince Charles’s turn to honour his grandmother’s grave during his visit to Israel.

Following the service, there was a small reception where the Cambridges were able to meet some of the survivors.

Kate shared a light-hearted exchange with Holocaust survivor Yvonne Bernstein, who was included in the Duchess’ personal portraits of victims of the atrocity. 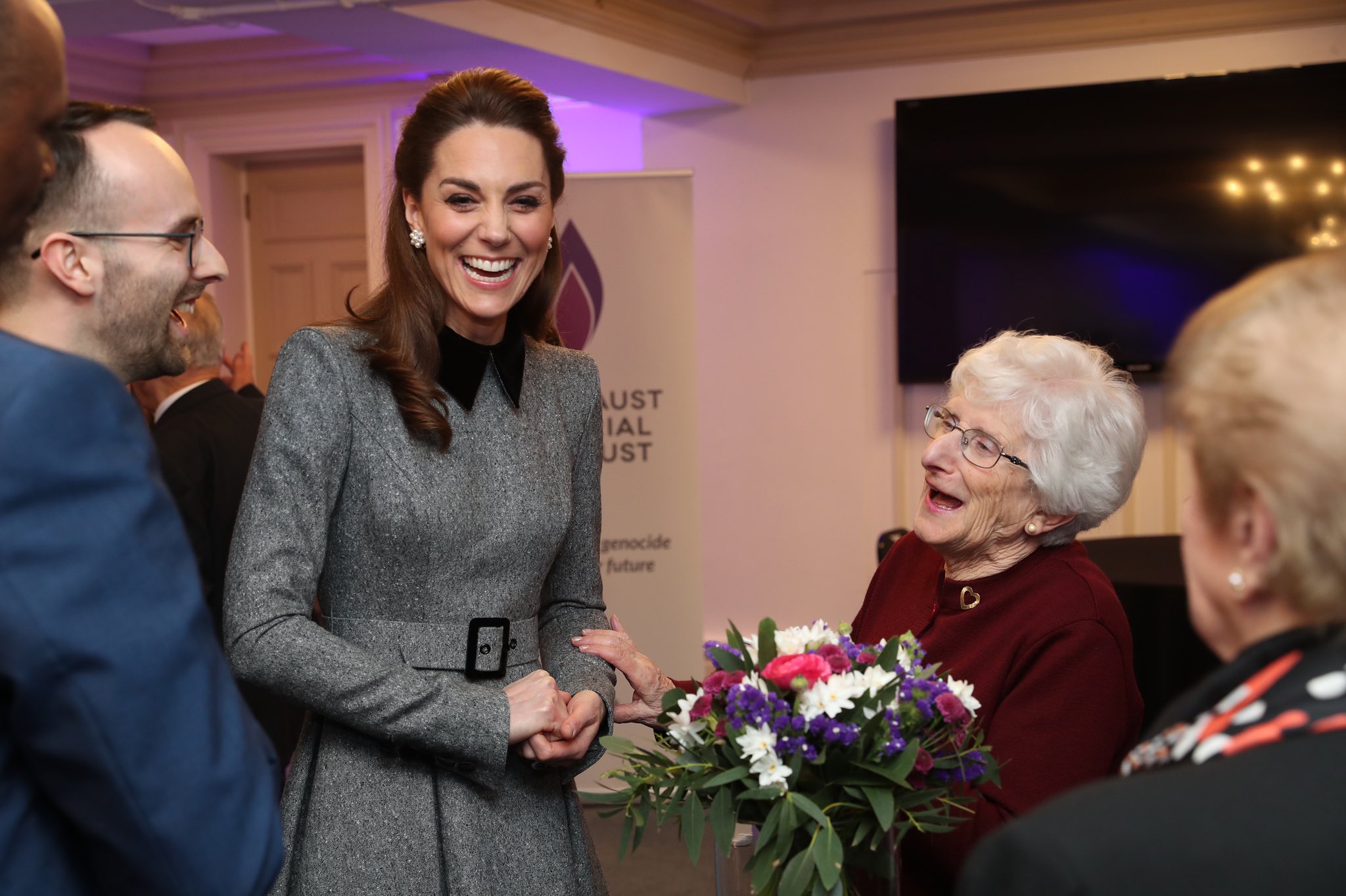 Bernstein was photographed at Kensington Palace for a special exhibition earlier this month. Told the images were beautiful, Kate laughed: “I had a very good model! She was fantastic. It was very special; I was very honoured.”

The two women embraced and seemed delighted to see each other again, with Catherine telling Yvonne, “You were brilliant, you were very patient.”

She said afterwards: “I got a kiss on both cheeks from the Duchess. She and all her staff were so kind to us. We were made to feel very comfortable.”

Asked how important the royal presence at the commemoration was, she replied: “It’s absolutely vital. It really is important. They do a terrific job.”

She also met another former camp victim Sir Ben Helfgott, who went on to represent Israel in the 1956 Olympics for weightlifting.

“It was so emotional, so many moving stories,” the Duchess told a group, including Mala, who had spoken on stage of her experience of surviving Bergen-Belsen. “You were fantastic,” she added, putting a hand on Mala’s arm, before asking about how she tells her story to schoolchildren.

“So many families are totally torn apart by the trauma and how that plays out over the generations,” said the Duchess.

Mala said afterwards: “I said I speak about it in schools and she was asking what impact it has. It brings them closer to the history.”

The 89-year-old said of the ceremony: “I found it very emotional. The reason I am able to speak about it all is that I’m able to control my emotions, but lately it has become more difficult. It [the music] went right into my bones.”

Meanwhile William spoke to a group including Daniela Abraham, a Roma activist who had been overcome by emotion after speaking on stage about how her relatives were murdered by the Nazis. 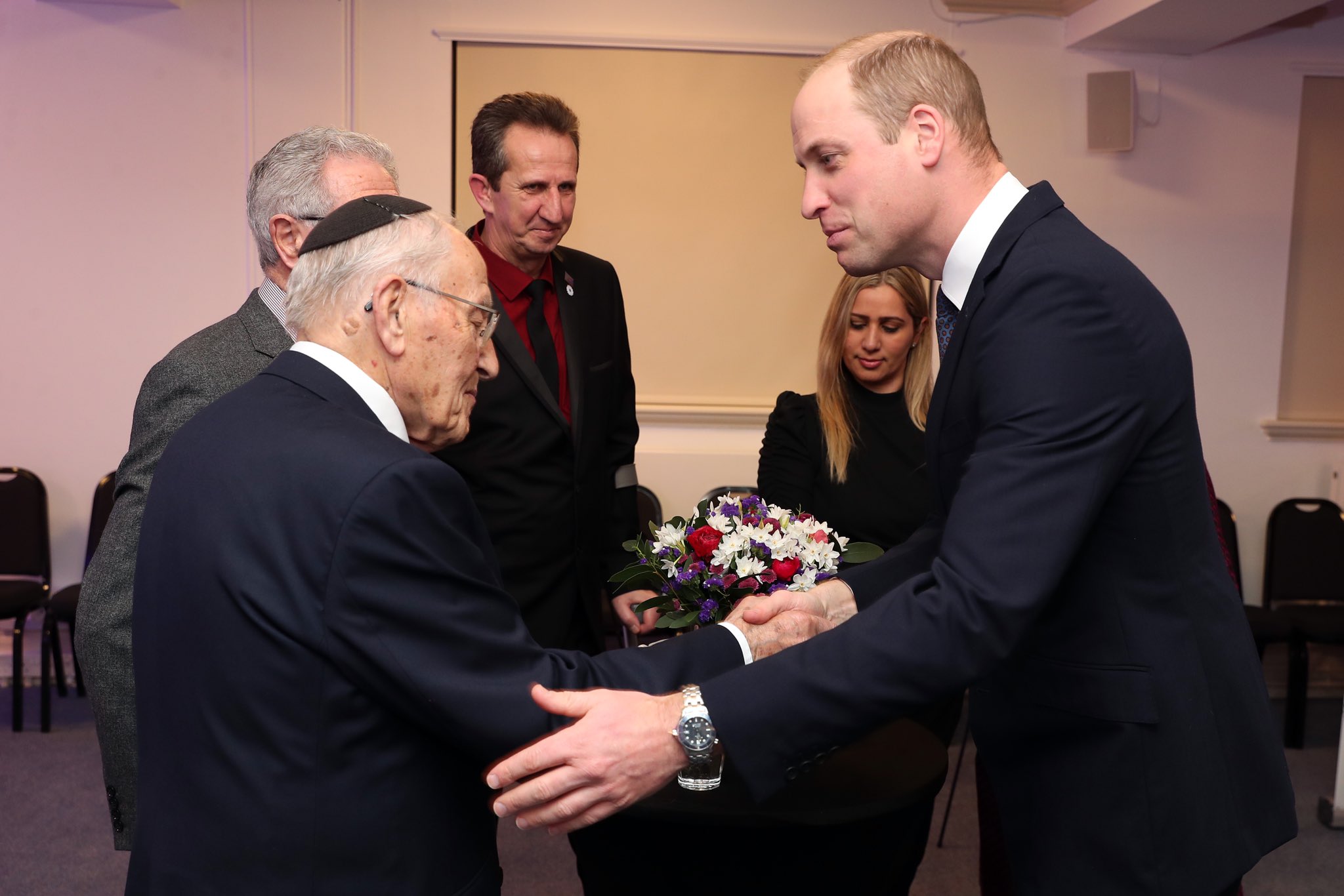 Kate told the same group: ‘It’s so humbling to hear the gratitude from people, despite what you have gone through. It’s heart-breaking to hear.

Manfred Goldberg, 89, a survivor of the Stutthof camp, told the Duchess people found it hard to comprehend how six million Jewish people were killed.

“When you hear the stories of an individual it becomes easier to understand this better.”

“And it has taken a while for everybody to be able to speak,” said Kate. ‘It’s hard to stand up there and do that. I’m really interested in intergenerational trauma and how it affects a family. It’s so important.”

Laura Marks said of the event, “At a time when we know identity-based hostility is increasing, it is heartening to see so many people stand together – both at the UK ceremony and at more than 10,000 local activities around the country.

“Holocaust Memorial Day is an important opportunity for us all to learn from genocide, for a better future.”