The Duke and Duchess of Cambridge joined many parents across the United Kingdom, and across the world today, as they started to get back into the school routine. Today was a very special day for the family too, and particularly for Princess Charlotte. Charlotte, today, joined her big brother George at Thomas’s Battersea school! 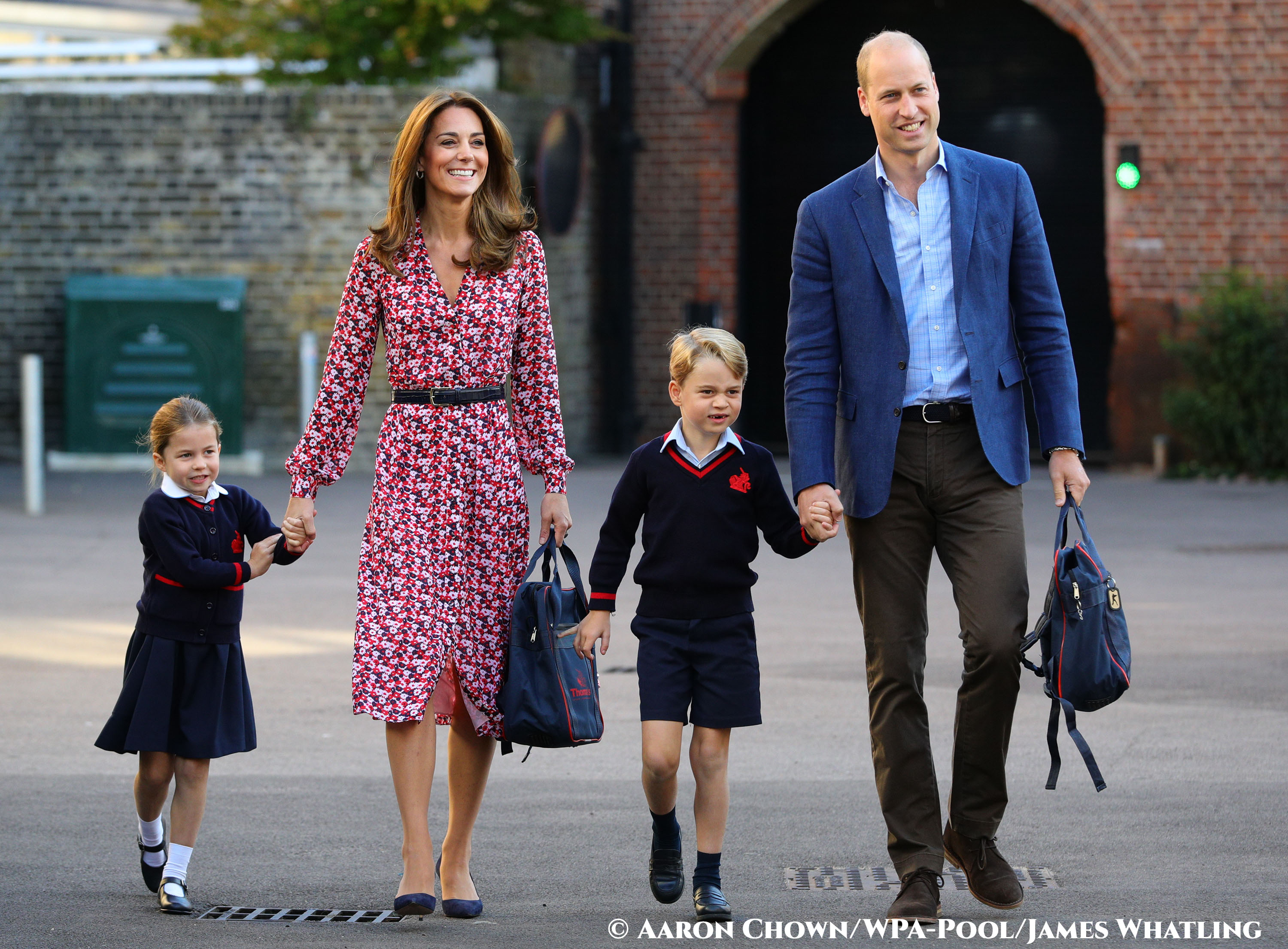 Princess Charlotte arrives for her first day of school, with her brother Prince George and her parents The Duke and Duchess of Cambridge, at Thomas’s Battersea. Picture by Aaron Chown/WPA-Pool/James Whatling

Unlike two years ago, when Kate was unable to attend George’s first day of school due to Hyperemesis Gravidarum (acute morning sickness) while pregnant with Louis, this was a family occasion. The Cambridge’s arrived at the side entrance to the school around 8:15am, away from the other children who and families who went in through the front, and away from the cameras. William held onto George and his bag, as he had done two years ago, and Kate held onto Charlotte and her bag – which was accessorised with a unicorn keyring!

George made faces as he walked towards the head of the lower school, someone who he knows well by now. Charlotte was shyer, hiding behind her mother’s legs at one point, before stepping forward to greet Helen Haslem. William and Kate greeted Haslem warmly, with Kate asking her about her summer and William mentioning the occasion but saying; “First day, very exciting.” The family then entered the building to take Charlotte to meet her teacher and settle her in.

The arrival itself was a low-key event, with only a small group of journalists in the school grounds to see the arrival. That’s a big difference from when William himself started his first day of school, with banks of photographers and television cameras there to catch the moment his mother and father, Charles and Diana, dropped him off. It’s also a huge contrast to Kate’s first day at school, when the big moment would only have been recorded by her mother and father, Michael and Carole.

Thomas’s Battersea is an independent school in London, which not only teaches the two royal children but also Prince and Princess Michael of Kent’s granddaughter Maud – who started at the same time as George. Charlotte is part of a class of 21 pupils, one of the three reception classes in her year. She will be known as Charlotte Cambridge to her teachers and classmates. She will start off on half days.

On the schools website, Miss Haslem says this of lower school: “The emphasis in the Lower School is on enjoyment and this is embedded in our broad curriculum and our most important school rule of ‘Be Kind’. Children quickly settle into the routines and expectations of the school where the atmosphere is noticeably happy, yet stimulating in nature. Our foremost aim is to ensure that every child feels safe, happy and confident at school. We help to create an environment in which children are eager to learn and to take an active part in their own learning.”

The school is situated in a Grade II listed building in London, on the site of the former Sir Walter St John’s Grammar School which dates back to the 1700s. It describes itself as a Christian school but is open to all faiths and believes that praise is the greatest motivator. Ballet, French, ICT, Art Drama, P.E and Music are all part of the curriculum. School lunches can consist of red Thai prawn curry, chicken Katsu, pork noodle stir-fry and, on ‘meat free Friday’, cheese and tomato paninis and fish burgers. William and Kate’s fees for Charlotte are around 2% lower than those for George as she is a second child at the school. The termly fee for George at the moment is £6,429, while for Charlotte it is £6,305.

Prince William and Catherine are no strangers to the school gate. The couple put an emphasis on dropping off and collecting their children as much as they can, and have reportedly become friends with the other parents in the playground. They’ve both helped out with coffee mornings and make a point at being at all the big occasions, such as cheering George on when it comes to sports day.

To mark the occasion, after the school day had finished, The Duke and Duchess shared a photo of the George and Charlotte standing with their arms around one another. The photo was taken on the steps of Apartment 1A, their residence at Kensington Palace, before they left for school.

We here at The Crown Chronicles wish Charlotte all the best in her new school!