The Earl of Wessex paid a visit to Christ’s College in Guildford today, which was originally opened by his late father, the Duke of Edinburgh, more than a decade ago.

Staff and students met Prince Edward on Wednesday, where the he heard about pupils’ Duke of Edinburgh Award (DofE) experiences ,as well as a previous encounter with Prince Philip.

The visit started with the Earl being greeted by the college’s Head Girl and Head Boy, plus Principal Sarah Hatch and the Headteacher of Pond Meadow School, Emily Hayward.

The Earl stopped to talk to Year 7 students for a few minutes. (@RoyalFamily/Twitter)

The Earl of Wessex then went into the Atrium to meet our Chair of Governors Stuart Zissman, and saw the plaque which the Duke of Edinburgh had unveiled during the opening of the school in 2009.

he then moved on to talk to three members of staff who met The Duke of Edinburgh when he visited. 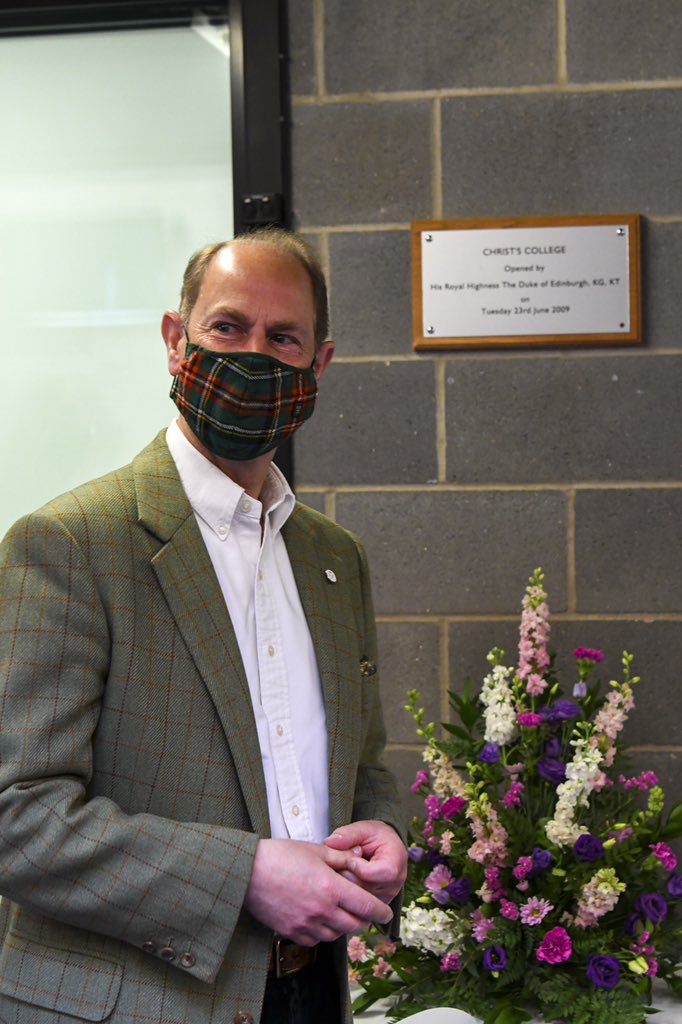 Edward saw the plaque which was unveiled by his father to commemorate the opening of the school over a decade ago. (@RoyalFamily/Twitter)

Members of staff shared their memories and experiences of Prince Philip opening the school in 2009. Recalling her memory of the visit, Chrissi Thompson, Head of Art, said: “We are a small school, and we felt very privileged and lucky that the Duke of Edinburgh came to open Christ’s College and spent such a lot of time with students, engaging with them and showing genuine interest in what they were doing.” 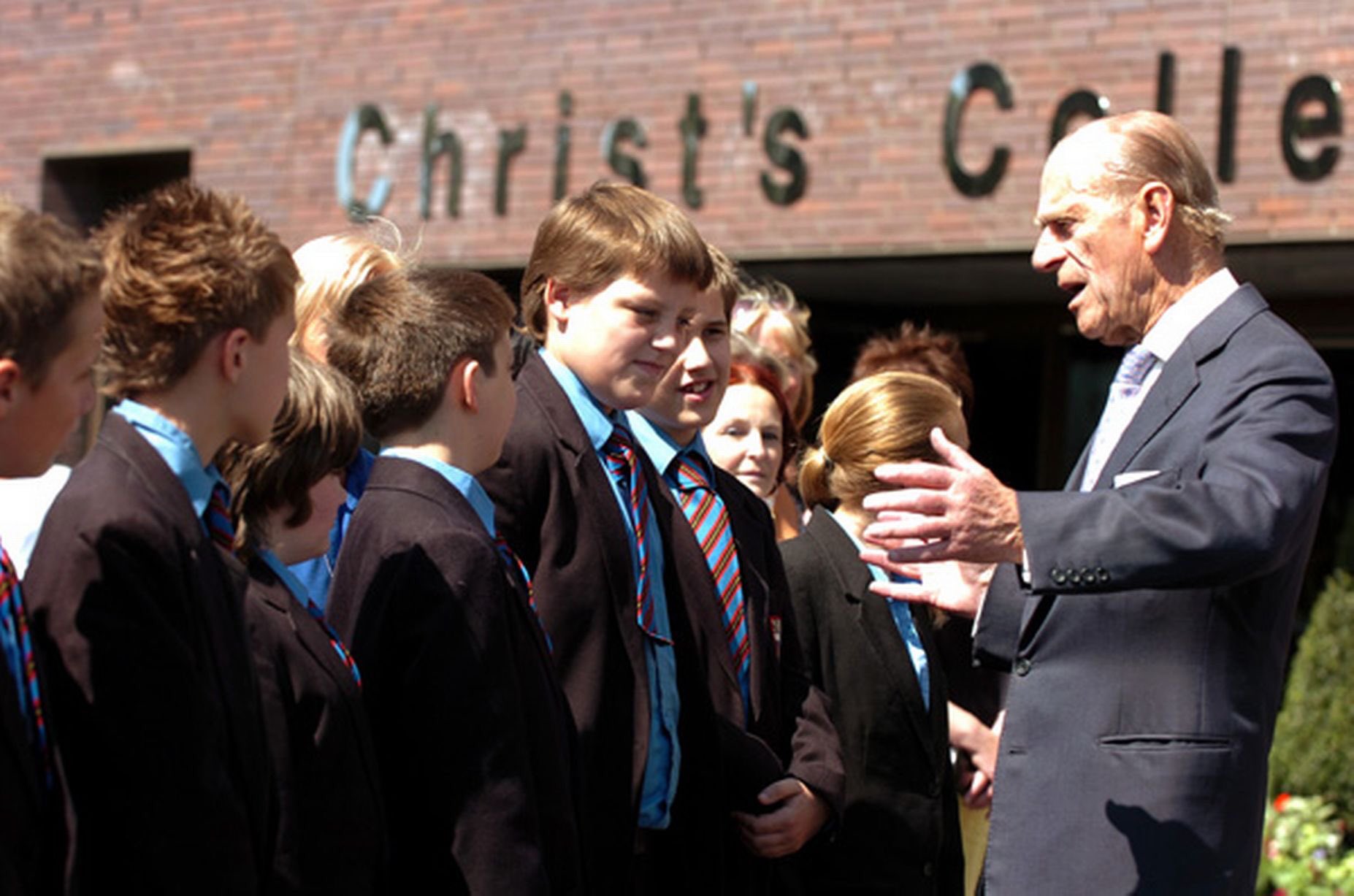 Prince Philip pictured talking to a group of students when he visited the school in 2009. (@RoyalFamily/Twitter)

Speaking of his memories of the late Duke, Stuart Kennedy, Assistant Principal, commented: “I told the Duke of Edinburgh that I was a PE Teacher, and we discussed the school transition from the old school site and how the current school was built on the original rugby pitches, which he was really interested in. The children loved his visit and with Prince Philip opening the new school site, Christ’s College was reborn.”

Lesley Sandiford, Assistant Principal, added: “When the Duke of Edinburgh visited there was of course lots of organisation and plans for the visit, but the Duke managed to find a closed door and found students who weren’t expecting to meet him that day! They loved how he interacted with them and especially how interested he was in them.” 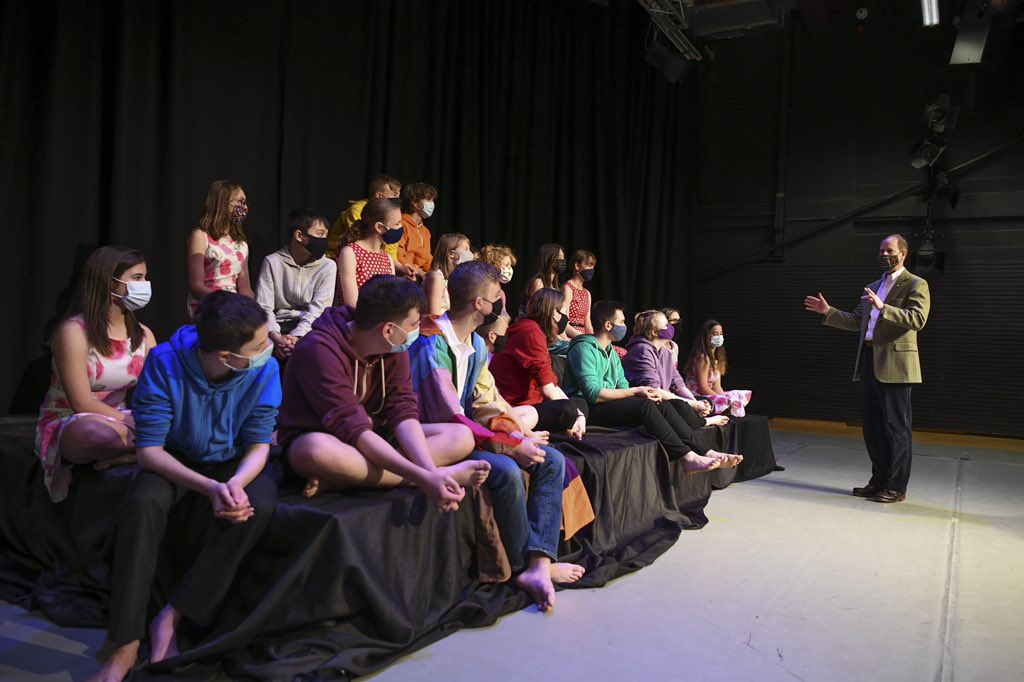 The Earl of Wessex saw a performance of ‘Joesph and the Amazing Technicolour Dreamcoat’. (@RoyalFamily/Twitter)

Prince Edward was then shown the Duke of Edinburgh Theatre, opened in his father’s name, where HRH watched students performing two extracts from our forthcoming College production ‘Joseph and the Amazing Technicolour Dreamcoat’.

Elis Virgoe, who plays Judah (one of the 12 brothers) in the show, said: “The performance was an incredible experience!  I felt honoured meeting the Earl, he was such a kind person and as a lover of the arts he was great to talk to.”

The Earl, a trustee of the DofE Scheme, went back outside and was introduced to Dave Cunnigham, the DofE Leader at educational institute. He also spoke to students in Year 9 who are just embarking on their Bronze Award.

Edward stopped by a group who were practising for their expedition as part of the Duke of Edinburgh Award scheme. (@RoyalFamily/Twitter)

During the visit, the Earl had the opportunity to join students as they demonstrated CPR, and cooking on a trangia, in preparation for their expedition later this year. The College started running The Duke of Edinburgh Award nearly 20 years ago to give young people opportunities to grow and develop.

In a recent interview with Sky News, The Earl of Wessex noted how the Duke of Edinburgh Award was ‘going to be even more important than ever before, because it’s those skills and experiences which are going to be looked for’ in potential employers in the present climate.

Since Prince Philip founded the DofE award scheme in 1956, over 6 million young people across the UK have taken part and the award has been present in a number of countries across the Commonwealth. It was created with the aim in helping young people to develop skills that they will need for work, and life in general. The programme is for those aged from 14-24 and has different sections – Bronze, Silver and Gold.

Principal Hatch said: “We were delighted to welcome HRH The Earl of Wessex to Christ’s College today and to share and reflect on the Duke of Edinburgh’s visit in 2009 when he opened our school.

“The students were really pleased to speak to The Earl, reflecting on their experience of the pandemic and school life as well as their DofE activities, and what the Award has meant to them in the past year.” 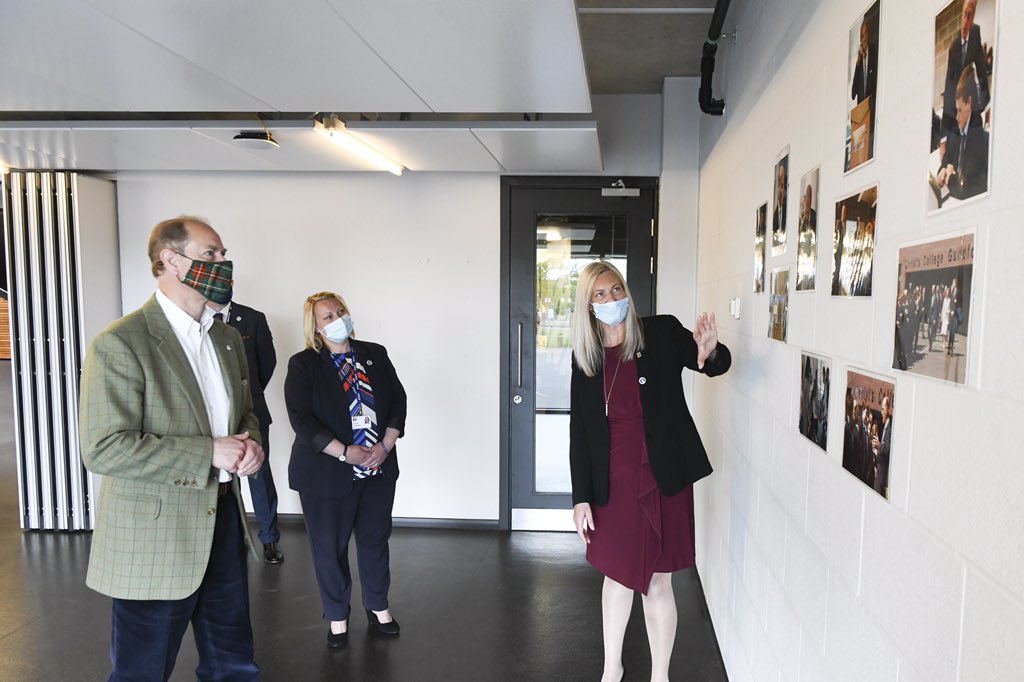 Edward heard from members of staff who met Prince Philip when he opened the school. (@RoyalFamily/Twitter)

The school will celebrate Founders Day on 23rd June 2021, which commemorates the official opening of the new school by Prince Philip.

Once Prince Charles has become King, the title of Duke of Edinburgh will be recreated for his youngest brother, The Earl of Wessex, for him to carry on the work of the Duke’s eponymous award. Prince Charles has inherited his father’s titles, which will revert to the crown when he succeeds as Monarch.

Prince Edward has played a large role in promoting the Duke of Edinburgh scheme and undertaken many trips to countries across the Commonwealth, including Australia, India, Western Africa, and Canada.

The Earl of Wessex, alongside The Countess of Wessex, The Duchess of Cambridge and Joanna Lumley, took part in a documentary called ‘When Phillip met Prince Philip: 60 Years of The Duke of Edinburgh’s Award’ back in 2016, which looked at how the Duke of Edinburgh came to create his award for young people.