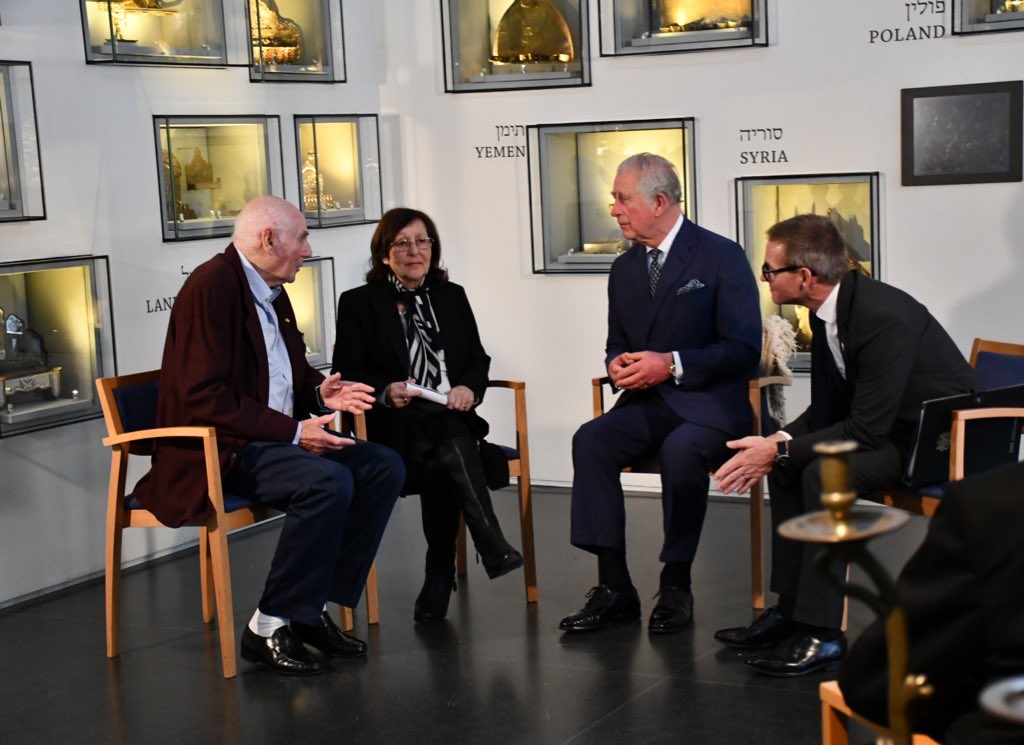 In a week that has seen his youngest son start a new life in Canada, to giving a speech about climate change in Davos, The Prince of Wales landed in Israel earlier today where he had a day packed full of engagements. The main focus of the day, however, was the Holocaust, ahead of the 75th anniversary of the liberation of Auschwitz on Monday (27th January).

The heir to the throne met with President Reuven Rivlin at his Official Residence in Jerusalem, Beit HaNassi.

Israel’s president welcomed Charles at the start of his first official tour to the country, telling him ‘we still expect your mother to come’. An unlikely outcome given that The Queen, now 93, has cut back her overseas travel to a bare minimum!

Following a private meeting, the Prince went on to plant an English Oak tree in the Presidential Garden.

Charles’ next engagement was a reception for British Holocaust Survivors at The Israel Museum Format where he was met by Isaac Molcho, Chairman of the Board of Directors.

The 71-year-old Royal was accompanied by the Chief Rabbi of the UK and the Commonwealth, Rabbi Ephraim Mirvis.

In the Hanukkah Lamp Gallery, the Prince met two Holocaust survivors; George Shefi his wife Yael, and Marta Wise and her husband Harold Wise. Mrs Wise told the Prince of Wales about the ‘hell on earth’ she endured while being experimented on by the notorious Josef Mengele.

She was sent to Auschwitz as a 10-year-old girl and told Charles that she was among the prisoners subjected to cruel treatment at the hands of Josef Mengele, a Nazi doctor who experimented on camp mates, and was dubbed ‘the Angel of Death’.

Wise said: “By a miracle we survived. It was hell on earth. Mengele was a particular devil. Our blood was taken. Jewish blood was no good, but it was good enough to take for the German army.

“He used to inject us with things. We had no idea what they were. You could be in absolute agony. He was a monster. There is no other way to describe him.”

Mengele was known to conduct genetic experiments on prisoners, with no regard for their health, safety or to what degree they suffered at his hands. Much of his work focused on twins, seeking to prove the supremacy of heredity and gene inhertiance, over environment and nurture, thus strengthening the idea that the Aryan race of Nazi ideology was superior.

George Shefi, a Berliner whose mother was killed at Auschwitz, fled to England as a child, where he took refuge during the war as part of the Kindertransport.

Mr Shefi, 88 – born George Spiegelglas – was sent to Britain by his mother in July 1939 at the age of seven, unable to speak a word of English. He lived with an English family, then moved in with a Jewish family.

He said: “I went to church for three years, crossed myself, then the next week I could not turn on the light or ride my bicycle on Shabbat or anything.”

Later in the war he went to join relatives in the US. Afterwards he moved to Israel, where he became an engineer.

He welcomed the presence of Charles and other world leaders in Israel to honour Holocaust victims, at the World Holocaust Forum in Jerusalem.

But Shefi said it would be meaningless without further action: “I think it is very good. The question is, what will you do with it afterwards? Whatever they do here, if it is just forgotten tomorrow – that’s not what it was meant to do.”

He said he had spoken many times in Germany about the Holocaust, telling children: “You are not to blame for what your grandfathers did. I am here to tell you it happened, and to convince you not to let it start again. You are responsible to me to prevent it happening again.”

This afternoon Prince Charles gave an address at the World Holocaust Forum attended by other world leaders, warning that ‘hatred and intolerance still lurk in the human heart’ and that society must remain ‘resolute in resisting words and acts of violence’.

We saw the Royal speaking to King Felipe of Spain, and King Phillipe of Belgium, amongst other leaders.

“The magnitude of the genocide that was visited upon the Jewish people defies comprehension and can make those of us who live in the shadow of those indescribable events feel hopelessly inadequate,” Charles told the audience. “The scale of the evil was so great, the impact so profound, that it threatens to obscure the countless individual human stories of tragedy, loss and suffering of which it was comprised.  That is why places like this, and events like this, are so vitally important.”

“The Holocaust must never be allowed to become simply a fact of history: we must never cease to be appalled, nor moved by the testimony of those who lived through it. Their experience must always educate, and guide, and warn us.”

The Royal added: “But we must never forget that they are also our story: a story of incomprehensible inhumanity, from which all humanity can and must learn.

You can read the full speech here.

Mrs Wise, now 85, spent 25 minutes with the Prince – far longer than most one-to-one encounters on a royal visit. She said: “He was very interested in how it was in Auschwitz and how we managed to survive.

“He was very sympathetic. He came across as genuinely interested, not just doing it for the sake of it.”

Charles has been patron of the Holocaust Memorial Day Trust since 2016, and actively sought to have interfaith dialogue across all religions for many years. Back in December, he hosted a reception for the British-Jewish community at the palace.

Following the meetings, The Prince of Wales went on a short tour of the Jewish Art and Life wing. Founded in 1965, The Israel Museum is Israel’s foremost cultural institution and one of the world’s leading encyclopaedic museums, housing a wide-ranging collection of art and archaeology of world-class status; a visit that would have appealed to Charles well known love of Middle Eastern culture. 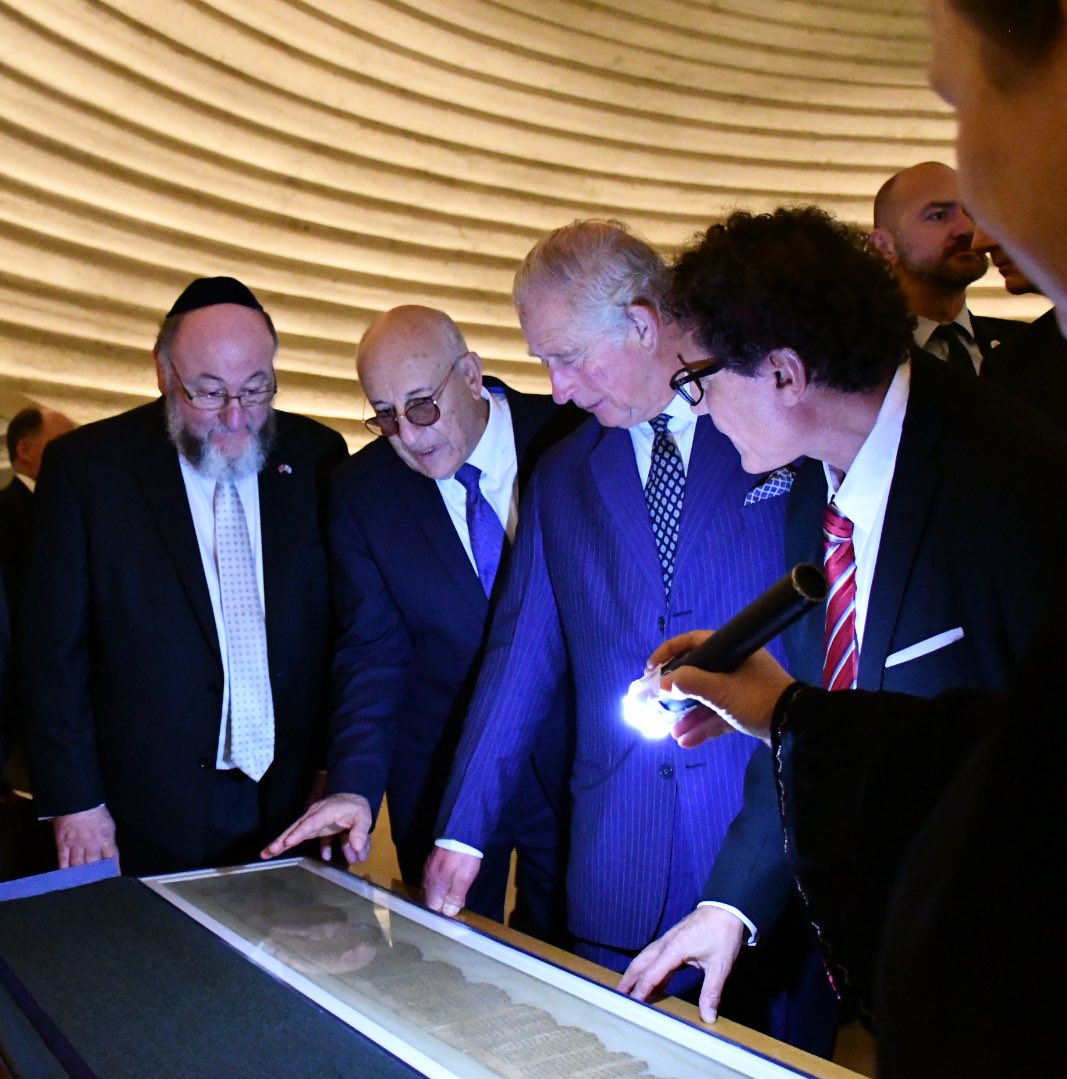 Prince Charles views exhibitions, including the Dead Sea Scrolls, at the Shrine of the Book in Israel (Clarence House)

The exhibition at the Shrine of the Book Complex represents a journey through time, which, adopting a scholarly-historical approach, traces the evolution of the Book of Books. The upper galleries take the visitor from the oldest extant biblical manuscripts, which were discovered in the Judean desert, through the story of the sectarians living at Qumran, who attempted to translate the biblical ideals embodied in these texts into a way of life.

The lower galleries tell the tale of the Aleppo Codex – the most accurate manuscript of the Masoretic text and the closest to the text of the printed Hebrew Bibles used today. The Shrine of the Book is a wing of The Israel Museum and was built as a repository for the first seven scrolls discovered at Qumran in 1947. The Dead Sea Scrolls are ancient manuscripts that were discovered between 1947 and 1956 in eleven caves near Khirbet Qumran, on the north-western shores of the Dead Sea.

The Prince of Wales then attended the World Holocaust Forum to commemorate the 75th anniversary of the Liberation of Auschwitz and International Holocaust Remembrance Day at Yad Vashem, where he attended a Leader’s Reception and made a speech, also laying a wreath on behalf of the UK.

Prince Charles said the “lessons of the Holocaust are searingly relevant to this day”.

“All too often, language is used which turns disagreement into dehumanisation. Words are used as badges of shame to mark others as enemies, to brand those who are different as somehow deviant.

“All too often, virtue seems to be sought through verbal violence. All too often, real violence ensues, and acts of unspeakable cruelty are still perpetrated around the world against people for reasons of their religion, their race or their beliefs.

“Knowing, as we do, the darkness to which such behaviour leads, we must be vigilant in discerning these ever-changing threats; we must be fearless in confronting falsehoods and resolute in resisting words and acts of violence.”

Yad Vashem is Israel’s official memorial to the Jewish victims of the Holocaust. It was established in 1953 as the world centre for documentation, research, education and commemoration of the Holocaust.

The Prince’s final engagement of the day was a UK-Israel Reception at the Ambassador’s Residence. There, he signed the visitors’ book and was presented with a unique demonstration of four innovative technological solutions in the fields of healthcare and sustainability including: a water filtration system, a biogas systems solution; a Sniff Phone and 3D printed hearts. The demonstrations will showcase Israel as a leader in innovation and the strong strategic partnership between the United Kingdom and Israel in the fields of innovative technology.

The last royal visit to Israel was in 2018 by The Duke of Cambridge who visited the tomb of his great-grandmother Princess Alice of Battenburg, Prince Philip’s mother. She was a deeply religious woman who was formally recognised by the State of Israel for her bravery in harbouring Jews from the Nazis in Greece.

The Duchess of Cornwall will be marking Auschwitz75 in Poland next week, while The Duke and Duchess of Cambridge are attending a commemorative ceremony at Westminster Abbey.