Queen & Willem-Alexander lead nation in Remembrance at the Cenotaph

Today, The Queen was joined by King Willem Alexander of the Netherlands at the Cenotaph for the traditional Remembrance Sunday ceremony. 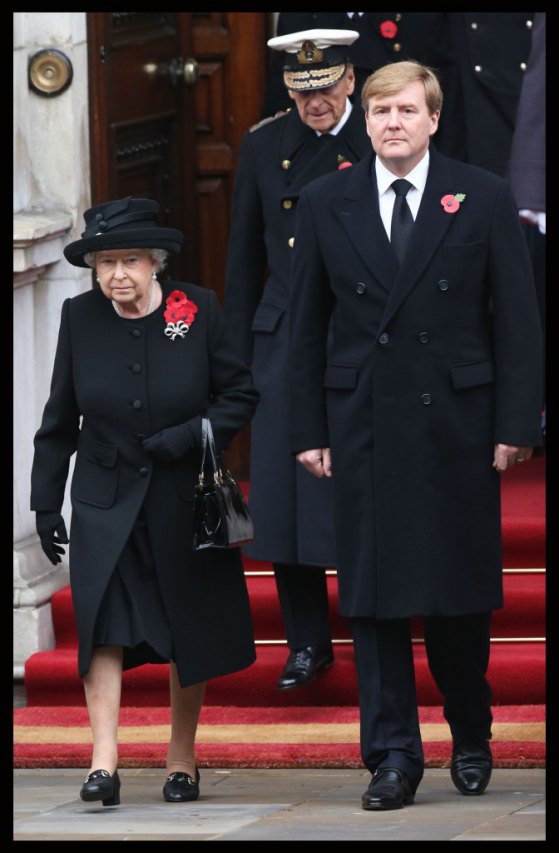 The Queen and King Willem Alexander arrive at the Remembrance Sunday service at The Cenotaph. Picture by Stephen Lock / i-Images

Just before 11am, the Royal party filed out onto the Cenotaph, where hundreds of people were waiting to see the service and remember the fallen.

A silence followed a 11am, with Big Ben marking the beginning of the sielnce, booming across a quietened London. The Last Post played to end the silence.

Queen Maxima of the Netherlands joined Catherine, Duchess of Cambridge, Sophie, Countess of Wessex and Sir Tim Lawrence on the balcony of the Foreign Office to watch the service.

Queen Maxima, the Duchess of Cambridge, Countess of Wessex and Sir Tim Lawrence at the Remembrance Sunday service at The Cenotaph. Picture by Stephen Lock / i-Images

King Willem Alexander also laid a wreath after The Queen, at the invite of Her Majesty to mark 70 years since the liberation of the Netherlands in WWII.

Prince Harry laid the Prince of Wales’ feathers wreath, as Prince Charles is currently in New Zealand. Prince Philip, Duke of Edinburgh also laid a wreath, along with Prince William, Duke of Cambridge, Prince Andrew, Duke of York, Prince Edward, Earl of Wessex, The Princess Royal, The Duke of Kent and senior politicians, including David Cameron and Jeremy Corbyn.

Willam-Alexander wore a British poppy for the occasion, while Harry wore his poppy on his hat, and The Queen held her poppies with one of Queen Victoria’s bow brooches.

Prince William then went to Horse Guards Parade to take the salute from veterans, as they marched through London.

May God Bless & Save Them All

A pity that the reason why was not mentioned, since this is the first time ever for a foreign head of state to join in this ceremony.
The reason was that the Kingdom of the Netherlands wanted to express it’s heartfelt gratitude towards the men and women of the UK that took part in the liberation of the Netherlands at the end of WW II. (Also written at the card on the wreath. It was not just a marking of a period, but an honest “thank you from the bottom of our hearts”.

Dear Hans
The King was invited by The Queen for the reason stated – the anniversary. Willem didn’t ask to come.
It is just the message on the wreath that mentions gratitude, the King clearly feeling it was important to say, or the invite could have been issued at any point following WWII, instead of an anniversary.